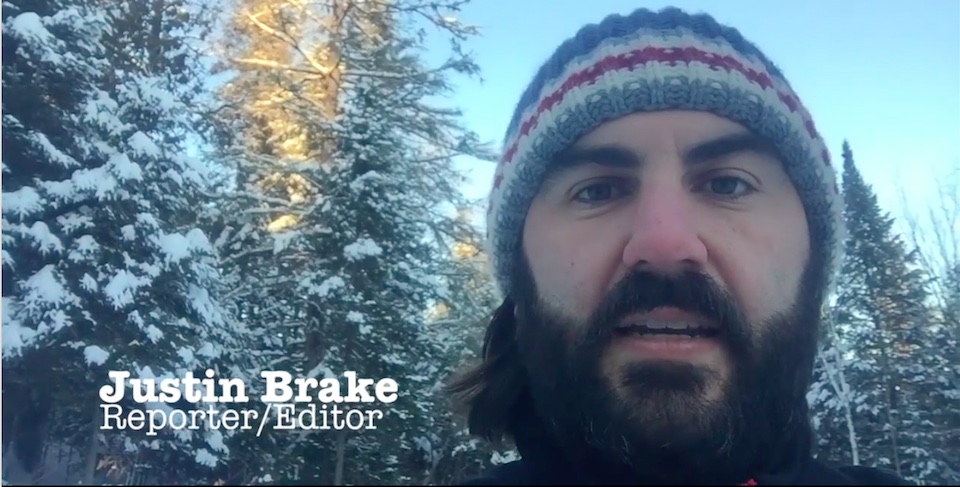 Justin Brake, reporter and editor at Newfoundland and Labrador’s The Independent, has been charged with disobeying a court order and mischief concerning property over $5000 for following demonstrators onto the Muskrat Falls hydroelectric construction site in October 2016. That month, Brake — despite covering the protest as a journalist — was named in a court order specifying that demonstrators could face arrest if they did not leave the site.

The charges were first announced in an RCMP news release Tuesday that did not include the names of the accused.

“We will obviously be arguing vigorously in the courts that as a journalist I have the right to report on stories of such critical importance and that I shouldn’t be charged criminally for doing that,” Brake tells CANADALAND.

Reporters Without Borders, Canadian Journalists for Free Expression (CJFE), and other journalists have condemned the proceedings against Brake and spoken out in his support.

“This is a serious threat to press freedom,” says CJFE executive director Tom Henheffer. “This is a well-known tactic, that they can prevent coverage by saying journalists can’t come in. We know that the RCMP has a long history of brutality when it comes to Indigenous protestors, so it’s critically important to have a journalist there as an observer. Journalists need to be able to do their jobs.”

This isn’t the first time in Canada that a journalist has been charged with entering private property in the course of their reporting. In another instance, Montreal journalist Cori Marshall was charged for covering the occupation of an Immigration Canada office in May 2016.

In October, activists cut a lock to access the Muskrat Falls construction site as part of their demonstration against the project, which they are concerned will harm the environment. In total, 18 men and 10 women will face a total of 60 charges including disobeying a court order, mischief, mischief over $5000, taking a motor vehicle without consent, and breaches of a court order.

According to the RCMP release:

The RCMP respects and protects the right to peaceful demonstrations as guaranteed under the Canadian Charter of Rights and Freedoms. The role of the RCMP when unlawful acts occur during a demonstration is to ensure public safety, preserve the peace and enforce the law while upholding the fundamental freedom of peaceful demonstrators.

“There were other reporters on the scene that day that did not follow the story, and if I hadn’t, then this really, really important story wouldn’t have gotten out,” Brake says.

Justin Brake is set to appear in Provincial Court in Happy Valley-Goose Bay on April 11th.

Meanwhile, the province’s Supreme Court is set to rule next week on the validity of the original court-ordered injunction against Brake.

CLARIFICATION (3/9/2017, 6:40 p.m.): This article originally carried the headline “Journalist Facing Criminal Charges For Covering First Nations Protest.” Although the Muskrat Falls protests have involved First Nations, they were in fact started by the Inuit.