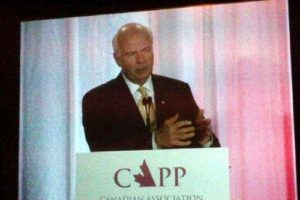 “Peter Mansbridge at CAPP’s Investment Symposium last night. He articulated that energy has moved to the forefront of news: economic, environment, safety.”

So was Mansbridge paid to tell Oil Sands companies how important they are? The answer is yes. When asked if her group paid the CBC anchor a fee or honorarium for the keynote, CAPP spokesperson Geraldine Anderson answered:

“Yes, Peter Mansbridge delivered the keynote speech at CAPP’s Investment Symposium, held in Toronto in December 2012. CAPP procured Mansbridge’s services through Lavin Agency. As part of our agreement with Lavin, we cannot disclose the fee.”

The Toronto Sun reports that Mansbridge has received as much as $28,000 per gig, but the amount is a secondary issue. The Oil Sands is perhaps Canada’s most controversial and divisive news topic, with competing interests constantly vying for positive media exposure and public sympathy. As the CBC’s Chief Correspondent and anchor of their flagship national news broadcast, Mansbridge exerts undeniable influence over what Oil Sands stories The National covers and how it covers them. The fact that he has been moonlighting for the energy industry  is a clear (and undisclosed) conflict-of-interest.

And he may have done it many times.

The twitter account that broke news of the CAPP keynote belongs to one Sierra Rayne, who describes herself himself in his profile as a Saskatchewan environmental scientist with a Ph.D. in chemistry.  Rayne also links to this event, the 2008 Global Petroleum Show, where Mansbridge is listed as a moderator for the Global Petroleum Conference,  this 2011 keynote by Mansbridge for the Canadian Association for Petroleum Landmen (sponsored by oil company Cenovus) and this 2004 moderation gig for the Canadian Institute of Mining, Metallurgy & Petroleum.

When Rex Murphy was revealed to have taken similar jobs, CBC Editor in Chief Jennifer McGuire defended him on the basis that Rex is a freelancer, and therefore doesn’t have to follow the rules set out for full time CBC employees.  Here are some of those rules, as laid out in the CBC’s Conflict of Interest and Ethics policy:

1. No conflict should exist or appear to exist between the private interests of CBC/Radio-Canada employees and their official duties.

5. Employees must not use their positions to further their personal interests.

15.Employees may not engage in activities likely to bring CBC/Radio-Canada into disrepute.

16.Employees may not take a stand on public controversies if CBC’s integrity would be compromised.

19. The duty to disclose and remove conflicts of interest rests with the employee.