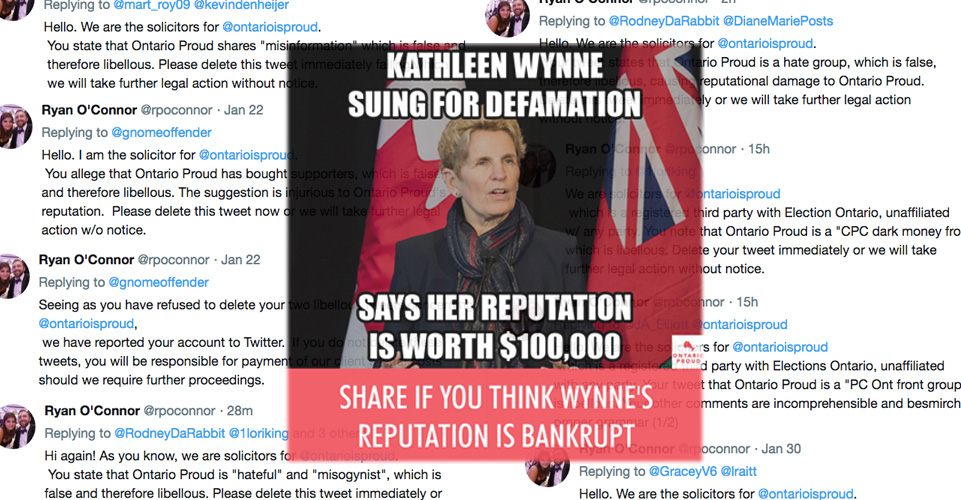 But it appears that the anti-Liberal political group has never gotten to the point of following through.
Article By Graeme Gordon
Share

Some critics of Ontario Proud — an influential Facebook page with over 354,000 followers that is also a registered third-party advertiser for the Ontario election — are accusing the organization of telling them to do as it says, not as it does. Over the the past several months, vocal detractors of the political action group, which impugns the characters of Liberal leaders Kathleen Wynne and Justin Trudeau on a near-daily basis, have been threatened with lawsuits for “libellous” statements made about Ontario Proud on Facebook and Twitter.

The person most recently threatened by Ontario Proud was freelance journalist John Semley, a contributor to publications like The Globe and Mail and Maclean’s (and who has also written for CANADALAND and appeared on its podcasts).

At 4:24 p.m. on Monday, April 23, shortly after the horrific van attack in Toronto, Semley replied to a tweet from CANADALAND news editor Jonathan Goldsbie about how Ontario Proud had edited a Facebook post to remove a description of the event as an “apparent terrorist attack”:

“[L]ikely a DIRECT result of my repeatedly telling them that they’re using the word exclusively to peddle paranoia and a demonstrably racist political agenda,” Semley tweeted. He had been arguing against the use of the term “terrorist” in the comments below their Facebook post.

Twenty-four minutes later, Ontario Proud board member and lawyer Ryan O’Connor sent Semley an email threatening to sue him for defamation if he didn’t delete the “libellous tweets” and make a public apology on Twitter.

“Your false and defamatory comments have caused reputational damage to Ontario Proud, its employees, and its directors. This is especially so considering that you have disseminated your libel on the web and to your 4,872 Twitter followers. The fact that you have accused Ontario Proud of engaging the promotion of ‘racis[m]’, which is proscribed by law, is high-handed and malicious and has amplified the damages Ontario Proud has sustained,” read part of O’Connor’s email to Semley.

“Hi Ryan: you’re aware I’m a journalist and reporter with access to legal counsel, and high-profile contacts across the nation’s newsrooms right?” Semley wrote back. “Because *I’m* aware that you’re a personal injury attorney who dispenses these libel chill emails in his spare time as a hobby.”

Eventually Semley relented and agreed to comply with O’Connor’s demands because, he wrote, “I am afraid of how powerful you are.”

Semley deleted the tweet the next day and posted a tongue-in-cheek apology in its place:

the folks from the Ontario Proud asked me to apologize for suggesting that using word "terrorist" is a form of racialized slur. because i cannot afford legal action, i've opted to comply. here's my apology: pic.twitter.com/H1F46ULw2y

“[Semley] said we had a racist agenda, and that’s clearly false. He has no proof to that,” says Ontario Proud founder Jeff Ballingall in a phone interview. “And when we threatened legal action, he did some apology that he thought was clever, but he clearly knew he was in the wrong because he had no proof that we’re racist and he backed down.”

Asked why Ontario Proud edited out the part saying “apparent terrorist attack,” Ballingall said it was merely out of caution.

“Our first take, we were correct, but at the time — it’s a loaded term and we were cognizant of that, and that’s why we changed it, and it’s a lesson that we’ll learn moving forward.”

“It doesn’t matter who did the act, if you are driving over [dozens] of people with a van, you’re looking to terrify people, and that’s why we did it at the time,” Ballingall says. “This alleged murderer allegedly had an anti-women, misogynistic ideology. And if that’s the case, it’s clearly terrorism.”

Semley did not want to further comment for this story. “It’s public knowledge that they threatened me, but I’d rather not agitate the beehive any further at this point.”

Prior to the threat against Semley, Ontario Proud’s O’Connor had also reached out to others on Twitter demanding they delete tweets for disparaging the third-party advertiser and non-profit as a “hate group,” “alt-right,” or for spreading “misinformation,” among other things.

This guy’s feed for the last few weeks is almost all threats to sue people who express an opinion about this “Ontario Proud” lobby group. It’s stunning. #cdnpoli #onpoli pic.twitter.com/IRYzd6v9Cc

Some critics believe Ontario Proud is hypocritical for relentlessly attacking Trudeau and Wynne, but then crying slander when they’re accused of inciting hate:

Ontario Proud – threatens to sue people who claim they are a hate-site and then promotes hate crap like this.

“When someone refers to us as a hate group, they’re lumping us in with white nationalists, which is clearly demonstrably false,” says Ballingall. “We do not incite hatred. We’re inciting people to stand up against unfair hydro bills and unfair tax hikes. That’s what we’re standing up for.”

“Nothing we do would be any different than what Seth Meyers says, what Saturday Night Live says, what other media say. We’re using satire, we use hard-hitting facts. We’re tough, we make jokes, but nothing we do is out of the realm of what is done in mainstream culture.”

Many of Ontario Proud’s memes and videos depict Trudeau as stupid and Wynne as a greedy crook giving kickbacks to friends.

Justin Trudeau Is An Idiot

#BREAKING A few minutes ago Justin Trudeau broke his own record for worst press conference ever. He forgot all his lines and made a complete fool of himself (again).Pass this on if you think Trudeau is an idiot.

Others think it’s ironic that Ontario Proud criticizes Trudeau and Wynne for encroaching on free speech but then ostensibly goes after the free speech of some of its critics.

“There’s a clear difference between free speech and slandering someone,” says Ballingall. “You can criticize us all you want, but you can’t say things that are untrue about Ontario Proud.”

Yet some of Ontario Proud’s own content could be characterized as misleading. Many Trudeau supporters, for example, were outraged that Ontario Proud truncated a clip of Trudeau at a town hall event interrupting a woman to correct her for using “mankind” instead of “peoplekind.” In the full exchange, the crowd laughed and many interpreted it as a bad joke from Trudeau (and the PM later described it as such). The Ontario Proud video clip removes this context.

Last week Justin Trudeau lectured a woman at a townhall for using the word “mankind” instead of “peoplekind” in her question ???Pass this on if you think our leaders have become too politically correct.

Since CANADALAND first reported on Ontario Proud back in the fall, the non-profit has gained another 65,000 Facebook likes (a 23 per cent increase) and, according to Ballingall, 52 million video views. Ontario Proud has also recently begun buying TV and YouTube ads attacking Wynne, and now has three full-time employees.

O’Connor was asked how many people he has threatened with lawsuits on behalf of Ontario Proud and if he has ever followed through on one of these threats. He responded to each question in kind: “As Ontario Proud’s solicitor, I cannot comment as this is confidential.”

CANADALAND was unable to turn up any record of Ontario Proud having commenced an action in either Superior Court or Small Claims Court in Toronto.

Ballingall says he doesn’t “know of us pursuing anything” and believes that everyone threatened has complied with their demands. “We don’t go after every troll, but if someone is prominent enough, we’re going to correct the record and protect our reputation.”

Twitter account @GaceyV6, which O’Connor went after for saying Ontario Proud is a “hate-site,” has only 111 followers.

Another critic, Calgarian Diane Marie (“part” of her real name, she says), who tweets as @DianeMariePosts to her 2,368 followers, has ignored Ontario Proud’s threats.

What kind of political party is supported and boosted by bigots, misogynists, and xenophobes on talk radio, in Sun columns, and by alt-right groups like Ontario Proud? The empty shell that was once the respectable Progressive Conservative Party. Pay wide berth, Canada. #cdnpoli

“I see Ontario Proud as a duplicitous operation,” she says via Twitter DM. “I believe we’re seeing a Hate-Industrial Complex where a lot of people are earning an income providing services for people who need to hate to feel alive: social media platforms, confirmation, etc. One political party is up to its knees in it.”

As for the threats, she says, “Well, it happened once or twice and I simply ignored that lawyer — forget his name — who threatened me on behalf of Ontario Proud. I concluded that he was simply trying to silence reasonable criticism and I didn’t think he had a legal argument.”

A few others threatened with legal action from Ontario Proud either did not respond to CANADALAND’s requests or did not want to comment for this story.

Ballingall says in the case of Marie, they couldn’t locate the “troll” in real life in order to file a lawsuit.

“I protected my Twitter account earlier this week as I didn’t have time to deal with the notifications, tags, etc. that I tend to receive from anonymous, mainly troll, accounts,” says O’Connor, explaining why he locked his Twitter account, shortly after Goldsbie tweeted a link to his past threats.

“For a relatively new, social media-driven group such as Ontario Proud, with an online engagement into the millions, it is imperative that it address baseless libellous comments … before they take on a life of their own online,” he says.

“It is notable Mr. Semley deleted his libellous tweet and apologised for his false accusation against Ontario Proud soon after receiving our libel notice. This vindicates the organisation’s approach.”

Some of Ontario Proud lawyer Ryan O’Connor’s tweets from a single nine-day period in January: