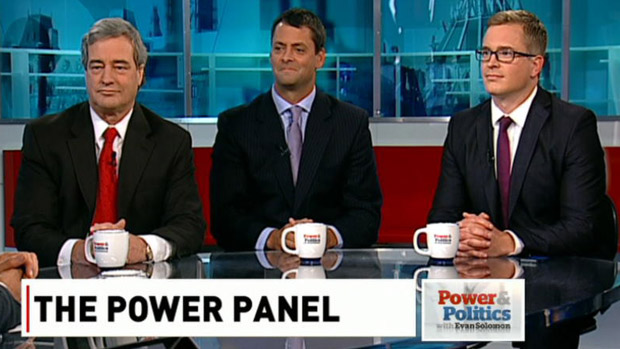 The people who are asked to speak on panels on two daily national news programs are overwhelmingly male, a snapshot review of guests on CBC’s Power and Politics and CTV’s Power Play has shown.
News Brief By Vicky Mochama
Share

The people who are asked to speak on panels on two daily national news programs are overwhelmingly male, a snapshot audit of guests on CBC’s Power and Politics and CTV’s Power Play has shown.

The data for CBC’s Power and Politics with Rosemary Barton was gathered from 61 episodes with a total of 241 panellist spots from October 1, 2015 to January 18, 2016. The list of guests came from the show’s Twitter feed and was cross-checked with pictures that host Rosemary Barton posted each show. Power and Politics uses a single panel format with three to four guests with political backgrounds. Both the guests who are exclusive to the CBC and non-CBC journalists are compensated for being on the show due to union rules, according to a producer for Power and Politics. 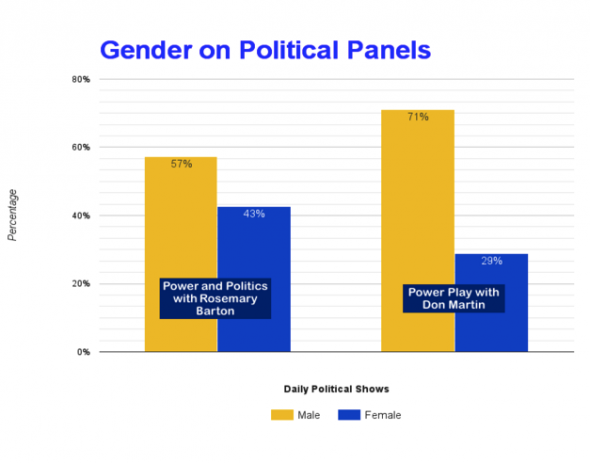 We reached out to CTV’s Power Play to provide statistics for the same period of time but were told the show does not keep the data. Episodes they post online went back as far as December 4, 2015. Because of that, our findings reflect the 34 episodes from then until February 1 2016. The show’s 121 panellist appearances during this time are split between two different segments: Press Gallery, a daily look at media coverage by two panellists, and Strategy Session, a (usually) bi-weekly panel with political strategists and consultants.

Data from both shows doesn’t include one-on-one interviews or panels between elected representatives. Elected representatives have already been chosen by the people; we wanted to focus on the choices television shows make when the pool of available experts is fairly open.

We approached producers at both shows to ask how they put together their panels. We spoke to Alyson Fair, a producer for CTV’s Power Play, and Nicolle Arams, a producer for CBC’s Power and Politics.

For Fair, a primary concern was scheduling. She declined to comment on Power Play’s gender imbalance, instead referring us to Matthew Garrow, a director at Bell Media, who sent us Bell Media’s 2015 diversity report. He declined to provide further comment. Every broadcaster is required by law to file an annual report with the CRTC with their diversity efforts towards greater representation for women, Aboriginals, visible minorities, and persons with disabilities.

Both producers said they rely on their relationships with current guests as well as word-of-mouth and research to find guests. Nicolle Arams said, “It becomes pretty apparent pretty quickly if you are out there and you are well-versed on an issue or topic.”

Producers for both shows said gender parity was a priority for the shows. “It’s an ongoing process,” Arams said. “We’re further ahead now than we were a few years ago, especially on gender. It’s always a consideration.” While she could not cite any specific training she had received, but she noted that the CBC’s mandate of reflecting Canada to Canadians is often repeated within the network.

Alyson Fair declined to comment on guest compensation but on the issue of finding female guests said, “We’re constantly looking at females and we’re looking at ways to enhance that … it’s always at the forefront.”

But after struggling to find a comprehensive list of guests, we wondered whether the shows themselves kept track of which panellists had made an appearance. In an email Fair said, “Unfortunately, I cannot provide you with a list of our panelists as they change on a daily basis usually because of their availability.”

At the CBC, however, the network keeps track of guest appearances. Arams said  “There is a formal process at the CBC to keep track of diversity for sure.” Chuck Thompson, head of public affairs at the CBC said one of the processes they use — the ECHOS system —  “monitors content, on air hosts/reporters/panelists and the executives behind the shows.” Thomson also said ECHOS does not track for gender.

The data doesn’t capture all the strides that are being made to represent women on television. We spoke to two female producers, one of whom works for a female-hosted show. But it does point to problems that still need to be addressed. That neither show nor their networks are able to provide statistics on the gender breakdown for their shows is noteworthy. Power Play’s producer would not comment on the show’s gender breakdown while Power and Politics’ Nicolle Arams said the gender balance “doesn’t seem totally off to me, but I’d have to go back and look at those months.” Yet somehow, these same networks are able to submit reports on their employment equity efforts to the CRTC.

Other shows which use panels such as TVO’s The Agenda have talked about their challenges in getting more women to appear. Yet by tracking their statistics as part of a series of changes in how they field guests, some have been able to achieve gender parity or near it.

That those who are asked to speak on issues related to ‘power’ are still overwhelmingly male is a concern for how women are viewed in relation to power. Failing to represent women as experts in their own right diminishes not only how Canadians are reflected back to themselves but also how much power women are seen to have.