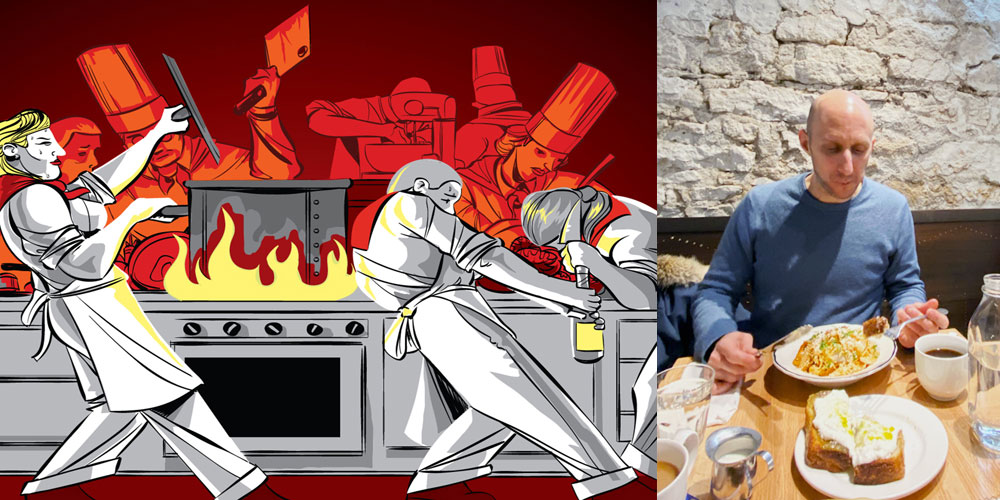 The Radicalization of Corey Mintz

How a lifestyle reporter became a labour reporter, without ever leaving the food beat
On the Monday show By Jonathan Goldsbie
Share

Corey Mintz is a very different journalist than he used to be. Over the course of a decade, he moved from being a lifestyle reporter to a labour reporter, without ever leaving the food and restaurant beat.

Consider that his first book, published in 2013, was How to Host a Dinner Party — a cheeky if sincere etiquette guide and instruction manual for doing exactly that.

His second book, released last month, is The Next Supper: The End of Restaurants as We Knew Them, and What Comes After — a reported examination of the layers of exploitation that are all but inherent in the restaurant industry as currently constituted. (I should note here that both I and Canadaland publisher Jesse Brown are good friends with Mintz; apparently, Jesse even once saved him from drowning.)

In between, Mintz’s freelance writing for newspapers and elsewhere — the Toronto Star, The Globe and Mail, The Walrus, TVO — both bore signs of this shift and informed it. Where in 2011 he’d offer “A ‘best of’ journey through Manhattan’s great Momofuku experience,” in 2019 he’d show how “The History of Food in Canada Is the History of Colonialism.” (Taste Buds, his 2018 podcast series for Canadaland, was an illustration of that tension, in both content and form.)

On this week’s CANADALAND, producer Sarah Lawrynuik takes the recent Winnipeg transplant for brunch at Clementine, where they talk about how the pandemic dragged longstanding issues out into the open, the “reprehensible” business model of food-delivery apps, and how the very practice of reporting can shape a person’s consciousness:

Here’s an edited excerpt from that conversation:

In reading through the book, what’s obvious is that you’re making an argument for virtuous dining. You want us to be aware of the issues in the industry — third-party delivery apps, labour in terms of treatment of staff in restaurants, and even the supply chain. It’s a lot for someone to take in and internalize. And you even referenced that Portlandia sketch where the couple is talking about where their chicken came from. So how do you think people who just want a meal — a positive experience, dinner after work — should go about doing that?

It can seem daunting. Shortly after my grandfather died, I was having dinner at my grandmother’s house. I was just starting to write about food, and my grandmother was excited. And my great-uncle Puddy — he’s a different generation — said, “Food is food. What else is there to say?”

In the kitchen, my grandmother took me aside and said, “Puddy’s an asshole. Fuck him.”

I think there’s the Puddys of this world, but I think the audience for the book is the not-insignificant portion of our population that likes eating out, loves restaurants, and is already aware that there’s a bunch of problems going on there, and maybe they’d like to make dining choices that are just a little bit more informed. Or they want to make those choices, and it’s so unclear. There’s no roadmap to ethics the way there is in that Portlandia sketch, silly as that seemed, for like, “Is it local, organic, sustainable?” What are those buzzwords when it comes to restaurants?

And if they want to take one thing from the book, it’s in the introduction: Let go of the idea the customer is always right. This is a bad philosophy, or at least has all sorts of bad outcomes.

All anybody needs to do is care. I think the Golden Rule is a pretty good rule — it’s just hard in restaurants, and we don’t know what’s going on behind closed doors.

You conclude that a big part of the problem is that people want the restaurant experience but they’re not actually willing to pay for what that would look like in an ethical manner.

Some people are, and some people aren’t. Before writing the book, I always felt comfortable blaming the consumer, because I felt like when you write for newspapers and magazines, they’re often very consumer-focused. When I would try to talk about, like, what’s going on with workers behind the scenes, editors would say, “This is inside baseball. People want to know where to eat. They want to know how things affect them, the diners.” And I would say, “Well, maybe if people were just compassionate, that’s their entry point to the story.”

I did find one passage particularly striking: “Having been an unquestioning promoter of food culture for so many years, I am ashamed.” Could you expand on that?

Food is essential. It’s gotta be good, right? It can even have, like, controlling-interest share. But there’s so much else going on, not just in the restaurant experience for us diners — the ambiance, the service, everything — but also behind the scenes, the ethical issues contributing to our experience.

Are we exploiting people when we dine out? That should be part of the story. But I was coming into food writing from the kitchen, where the chef was my boss. The chef was the most important person in the world. The chef was the mother/father person who had taught me how to make risotto perfect every time, how to touch a steak or a duck breast in the pan or on the grill and know if it’s rare or medium rare.

They had taught me my wizarding skills, so I felt, not beholden to them, but still in awe of them. And I think I still spent a number of years as a writer, not just sort of blindly supporting them, but also being part of a food-media system that prized food as entertainment rather than news. If I wanted to write about food, it was like, well, I had to write a food-trend story or a list of the top 10 places to go. I was never good at those stories, and I always got so much blowback from editors. They learned very quickly, “I can’t assign a health-trend story to Corey. He’s gonna send me a bunch of accusatory paragraphs that devalue the food-trend ‘superfood’ story.”

I spent a number of years struggling as part of that system, always with those doubts of, like, “I don’t like these kinds of stories, but these are the only kinds of stories I can get assigned.” Until, honestly, I had grown enough as a writer to learn how to write and report the story that I’d pitched on my first day at the Star, which was: “Why is it that the fancier the restaurant, the less cooks are paid?”

And only then — once I had done that story and felt good about it and I did a good job — that my career just took a serious turn of the steering wheel and went hard in that direction, not just about labour, but about the variety of systemic issues surrounding food and restaurants.

I didn’t go to school, so that was college for me. Those four or five years were me learning to be a reporter, but there’s also some embarrassment and yeah, shame, as I was like, “Oh, I had a column for five years where I got to write about pretty much anything I wanted, and I don’t think I made the best use of that time.” I mean, how many columns did I write about climate change? How many columns did I write about workers’ rights in the restaurant field? Some of that was because I was learning about economics and high-rise window washers and magic and municipal politics and a bunch of things that have informed who I am now. But there’s some guilt there.