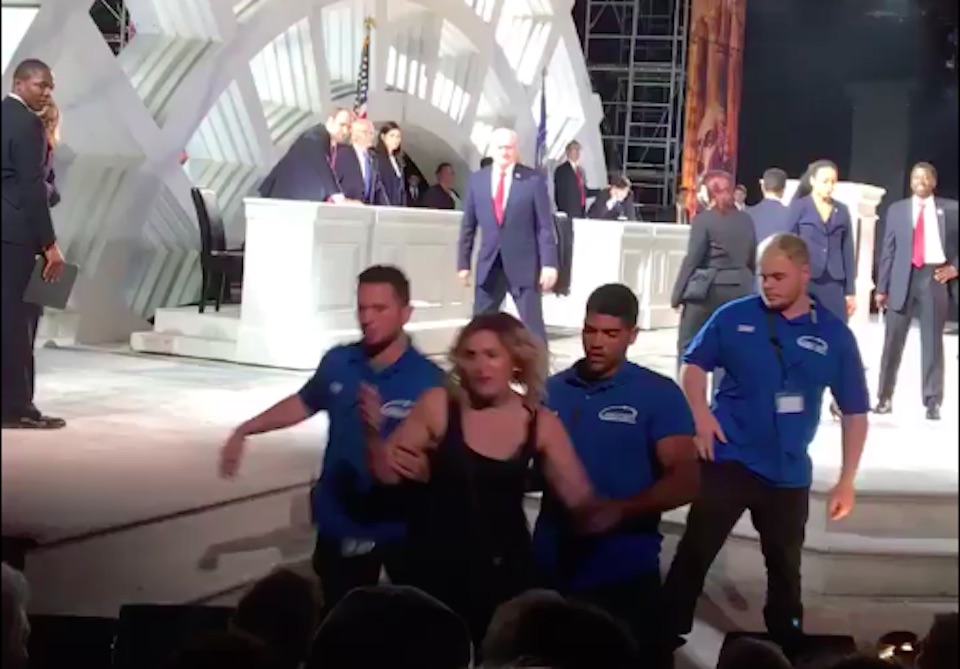 Rebel Media is making the news again with another of its activists being arrested.

Laura Loomer — the newest American addition to Ezra Levant’s alt-right media company — disrupted a performance in New York’s Central Park last night in an act of protest over the Public Theater’s portrayal of President Donald Trump as the title character in Shakespeare’s Julius Caesar, who is assassinated in the play.

Loomer stormed the stage in the midst of the assassination scene, live-streaming herself shouting, “Stop the normalization of political violence against the right! This is unacceptable! You cannot promote this kind of violence against Donald Trump!”

The moment I rushed the stage of Julius Caesar. Listen to the violence and stabbing of "Trump" that occurred right before. It is revolting. pic.twitter.com/TLWGSDv4Q8

Loomer was booed and escorted off stage by security in under a minute, then arrested by the NYPD shortly thereafter. The performance quickly resumed.

Last month, The Rebel’s UK correspondent Tommy Robinson was handed a three-month suspended jail sentence after being found in contempt of court for his conduct while recording a video.

Jack Posobiec, The Rebel’s former Washington correspondent who recently parted ways with the company, also protested the performance and live-streamed Loomer before joining in himself, screaming: “You are all Goebbels! You are all Nazis like Joseph Goebbels! …You are inciting terrorists! The blood of Steve Scalise is on your hands!”

According to The New York Times, after Loomer was taken off the stage, she was asked by police to leave the premises but remained defiant and continued to shout. She was then arrested for criminal trespassing and disorderly conduct, and released a few hours later.

Levant was quick to launch the fundraising webpage FreeLaura.com about an hour after the media stunt, asking followers for money for her lawyer. Public records appear to indicate, however, that he registered the domain name roughly six hours prior to the start of the performance.

“The murder-porn remake of Julius Caesar is just the latest attempt to normalize violence against conservatives,” says an excerpt from The Rebel’s online statement. “From Kathy Griffin’s grotesque photo shoot with what looked like the blood-soaked, decapitated head of President Donald Trump, to Madonna’s speech in Washington saying she had ‘thought an awful lot about blowing up the White House,’ the left has abandoned democratic norms and embraced fascist political violence.”

Loomer’s and Posobiec’s protest videos quickly ricocheted across right-wing cyberspace, becoming one of the top trends on Twitter, with InfoWars, the Drudge Report, and Fox’s Sean Hannity (with audiences of millions) promoting and/or praising the act; some even equated Loomer to Rosa Parks.

The Left doesn't like it when their tactics are used against their "expression." How many wd storm stage if "Obama" was stabbed? https://t.co/FyY3kuUMmt

She broke the law.

To fight an injustice

The protesters @LauraLoomer & @JackPosobiec were exercising the same free speech rights as the people putting on the play https://t.co/wbHSlwPBIx

We need to get Laura Loomer a NYClawyer immediately, she is under arrest for peaceful action! https://t.co/UNEup3H41Y

Woman protesting public murder of Trump is arrested by police at Julius Ceacar in the park! https://t.co/fIwQcB4a0L

But not all right-wing commentators were impressed with The Rebel’s shenanigans:

Great, now we have alt-right SJWs.

Shouting down JULIUS CAESAR. Animals. You false conservatives are destroying this country.

In an apparent response to The Rebel’s #FreeLaura hashtag campaign, The Public launched its own:

Many right-wing commentators have been claiming the congressional baseball shooting targeting Republican congressmen was fuelled by violent imagery and rhetoric recently used by the left.

On his new web series, Canadian Mark Steyn explained how he believes the left is dehumanizing the right and how that has led to a trend of disturbing incidents. He listed recent attacks on right-wing writers, from columnist Andrew Bolt being assaulted by Antifa activists in Australia, to Jihad Watch’s Robert Spencer being drugged in Iceland, to author Charles Murray’s planned speech at Vermont’s Middlebury College being shut down and the liberal professor who organized the event sent to hospital with a concussion.

Before Loomer joined The Rebel, she was employed by James O’Keefe’s Project Veritas, a right-wing activist and investigative organization that performs undercover sting operations on government institutions and Democratic organizations. Project Veritas made international headlines last election cycle when O’Keefe released tapes from his undercover activists that they claimed showed Democratic operatives planning to disrupt Trump rallies and scheming of potential voter fraud.

This is not the first protest/publicity stunt Loomer has done for The Rebel. Last week, she covered NYC’s Fearless Girl statue in a burqa in an anti-Sharia protest.

Of late, Levant’s Rebel has embraced its mantra of “we don’t just report the news, we participate in it.”

Levant has followed in the footsteps of Andrew Breitbart, the deceased founder of the hugely influential right-wing news site bearing his name.

Breitbart pioneered what fellow right-wing journalist Lee Stranahan coined as “stunt right” tactics. The stunt right are right-wing activists who adopted the political street theatre of the left to gain the attention of mainstream news.

On Saturday morning, Stranahan explained in a Periscope video why the right is resorting to publicity stunts: “The reason [they] do this… is to get things in the news cycle that the establishment media won’t cover, you dig. …The establishment media may mention something, but they won’t discuss it… You have to do something to get noticed.”