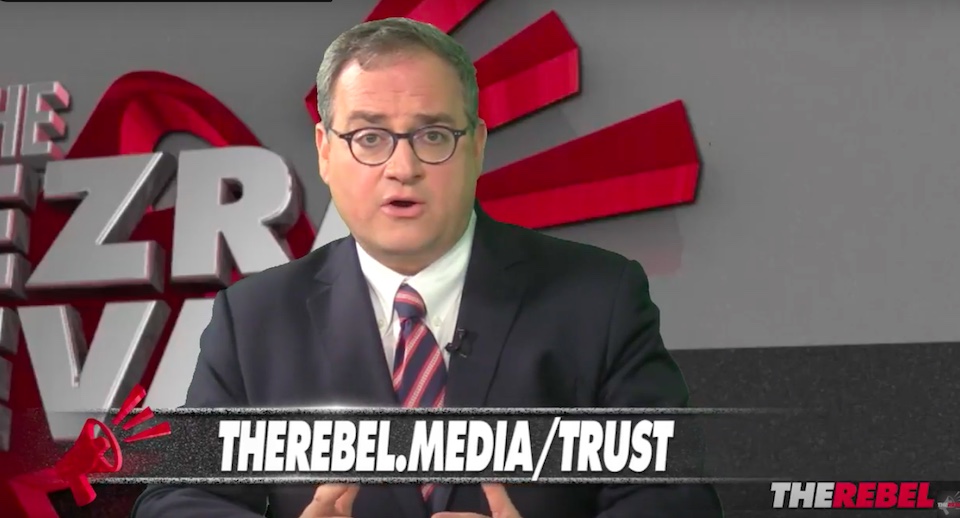 He hopes to "prove we’ve gone back to our roots journalistically."
News Brief By Jonathan Goldsbie & Graeme Gordon
Share

“I am a flawed leader who has made mistakes,” Ezra Levant conceded Tuesday night as part of a fundraising plea on a “SPECIAL edition” of his nightly Rebel Media show, which was brought out from behind its usual paywall.

He admitted that, following a terrible week for The Rebel, the status quo was no longer acceptable and that he would need to take a number of steps to put the company on stronger footing.

“Do you think we can pull out of this?” he asked his guest, longtime managing producer Hannah Vanderkooy. “Part of me thinks it’s just been a media fake crisis, but part of it was real, and I want to acknowledge that.”

Levant conceded that he had been spread too thin trying to manage the business on his own. “I can’t do my TV show, all our campaigns, and also run the company, and also expand the company; it’s too much. I started to let things fall through my fingers.”

His plan includes bringing in new business management, as well as a managing editor to ensure that their “rambunctious reporters are not going off target.”

“So this gives us a real chance to reboot, with a new team, new talent, new journalists. To really prove we’ve gone back to our roots journalistically.”

He also launched a new “Rebel Media financial disclosure” page giving broad overviews of the company’s fundraising and expenses. According to the page — which doesn’t actually disclose any financial documents — The Rebel raised $1.54 million from crowdfunding over the last fiscal year for its “business operations, which nearly covers the $1.67 million in expenses associated with those costs.” The page makes no mention of The Rebel’s other revenue sources, including advertising and premium subscriptions.

“I really do think, this time, it’s do or die,” said Levant.

Following his first look at the “disclosure” page, George Llewelyn-John — one of the the former Rebel staffers who blasted the company’s opacity in videos and interviews late last week — told CANADALAND in a message that it was “a start, but it does seem to raise more questions than it answers. Given the number of people who have donated their hard-earned money to Rebel over the last two years, I had hoped for more.”

Having now watched Levant’s video and more closely examined the page, however, he and partner Caolan Robertson say they are less than impressed.

“I literally can’t believe he is using this as an opportunity to collect more emails and solicit more donations,” Llewelyn-John says. “This is Ezra and The Rebel at rock bottom.”

“They have revealed practically nothing in that trust article,” adds Robertson. “1) It’s a shame it took me exposing them to even TRY, and 2) This is not the accounts, release your accounts.”