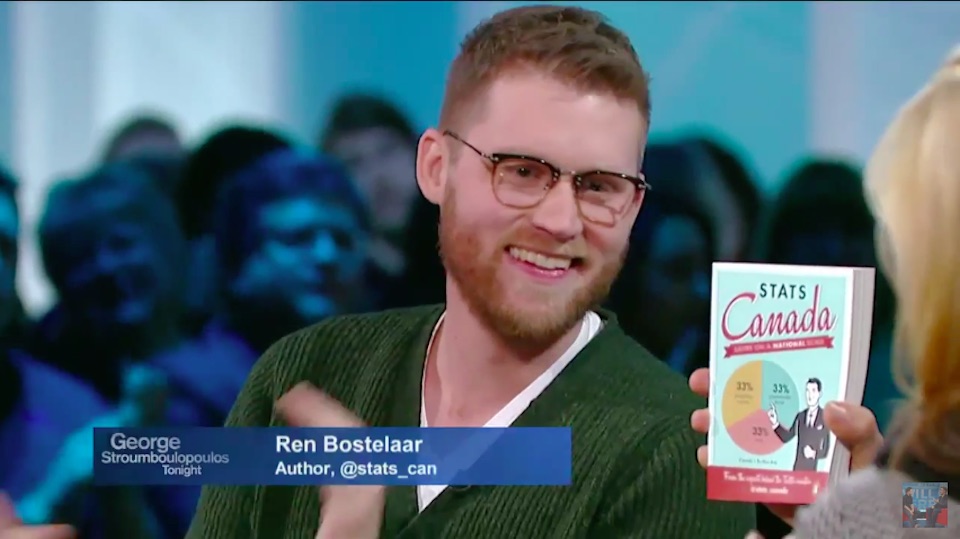 But through his lawyer, Ren Bostelaar denies engaging "in the act of doxxing."
Article By Jonathan Goldsbie
Share

In a Facebook post on Friday afternoon, Ren Bostelaar — one of the people behind the enormously popular @stats_canada Twitter account — confessed to sharing names and “sensitive photos” of women he knows on 4chan’s /b/ message board. Further investigation by those affected has uncovered what appears to be a pattern of behaviour by Bostelaar involving similar actions across multiple websites over more than a decade.

Sometimes called the “asshole of the Internets,” 4chan’s /b/ board is an infamous and highly pornographic manifestation of the web’s unrestricted id, where memes and nudes are swapped in equal measure. 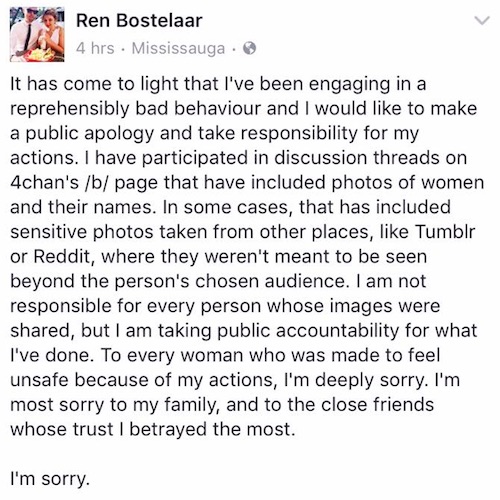 “It has come to light that I’ve been engaging in a reprehensibly bad behaviour and I would like to make a public apology and take responsibility for my actions,” Bostelaar posted to his now-deleted Facebook profile. “I have participated in discussion threads on 4chan’s /b/ page that have included photos of women and their names. In some cases, that has included sensitive photos taken from other places, like Tumblr or Reddit, where they weren’t meant to be seen beyond the person’s chosen audience.”

In a follow-up post, Bostelaar, who is also a photographer, stated that “I did not share any images that were sent to me without consent, I didn’t post photos from any photoshoot without the subjects’ consent, but I *did* re-post images that were available on other sites.”

Others, however, have indicated that some images appeared to have been taken from closed Facebook groups and private Slack channels, including ones specifically set up to provide safe spaces for sex-positive discussions.

Under the Criminal Code, it it illegal to knowingly publish or distribute an “intimate image” while being aware that the subject didn’t give consent to do so (or being reckless as to whether they did). A conviction carries a maximum penalty of five years in prison.

Bostelaar referred a request for comment to his lawyer, Sam Goldstein, who told CANADALAND: “Mr. Bostelaar apologized for posting photographs of some women on 4chan and /b/ page. The photographs he posted had been posted by the women themselves to public social media websites, such as Facebook, Reddit, or Tumblr. He did not engage in the act of doxxing. That is to say, he did not deliberately disseminate private details of these women on the internet with malicious intent. He is deeply sorry for what he did.”

Goldstein declined to comment on the allegation that some of the photos may have been taken from closed Facebook groups and how that may or may not relate to section 162.1 of the Criminal Code.

Bostelaar is one of five people behind the satirical Stats Canada Twitter account, whose 603,000 followers make it the most followed comedy brand in the country (well beyond 22 Minutes, The Beaverton, and even Just For Laughs). He is also credited as a co-author of its two spin-off books and has appeared as the face of the group on shows such as Q with Jian Ghomeshi.

On Sunday afternoon, Stats Canada posted a statement to Facebook and Twitter: “We are shocked and deeply concerned by the recent actions of Ren Bostelaar. This kind of behaviour is completely inexcusable and does not reflect the values of Stats Canada. Our thoughts are with anyone this may have affected.”

The other people behind Stats Canada posted their own statements, including Sam Montgomery, who wrote that “things with Stats Canada remain very unclear and complicated due to contracts.”

100% of Canadian women hate dudes who dox women they know on 4chan.

On his now-deleted LinkedIn profile, Bostelaar also identified himself as a “story and script writer for [a] satirical news program broadcast nationally” on CBC Radio. A spokesperson for the CBC confirms that Bostelaar has worked for them as a freelancer, but that they have “no ongoing contracts with him.”

The chain of events leading to Bostelaar’s admission began in the middle of last week, when a handful of women started noticing an unusual number of men adding them on Snapchat, some of whom were sharing dick pics. Upon inquiring into how one of them found her, a man said he got her handle from 4chan.

A subsequent search turned up a (since deleted) post dated March 14 listing five Snapchat handles as “sure wins” for coming across nude photos. “Start with a chat, not a dick,” advised the user, who — as is customary on /b/ — was anonymous.

The women conferred with each other and quickly determined that Bostelaar was the common thread between them.

Upon gathering evidence, they confronted him in a group Facebook conversation.

“There’s a lot of things pointing towards you and we wouldn’t collectively confront you about it unless we were all 100% certain,” wrote Sophia Sadoughi, who provided CANADALAND with screenshots of the conversation.

Bostelaar initially denied the allegation, responding that, “I can tell you with 100% honest to god faith that I am not a 4chan guy and I didn’t post that.”

“Somebody is fucking with you,” he wrote after being pressed further, “and that’s upsetting.”

The following day, after Sadoughi became aware of his confession to another woman involved, she approached him again.

This time, he admitted it and apologized.

“I’m sick,” he wrote, “and the thought of getting caught excited me.”

On Friday afternoon, he posted his public Facebook statement.

“And then a lot of women started coming forward, saying that this has happened to them before and he’s leaked their personal info, phone numbers, explicit photos, and it just blew up from there,” says Sadoughi. “And we realized he’s been literally doing it for years.”

Screenshots from the Something Awful forums show a user that was apparently Bostelaar posting nude photos on May 22, 2005, along with the explanation that they were “salvaged from [a] friend’s memory card.”

Sadoughi says that some of the women whose information he posted online are looking into taking legal action.

In another Something Awful post dated March of that same year, the user who was apparently Bostelaar indicated that he once “posted some pics of an ex in this thread,” and had “wondered if that would bring bad karma to me.”