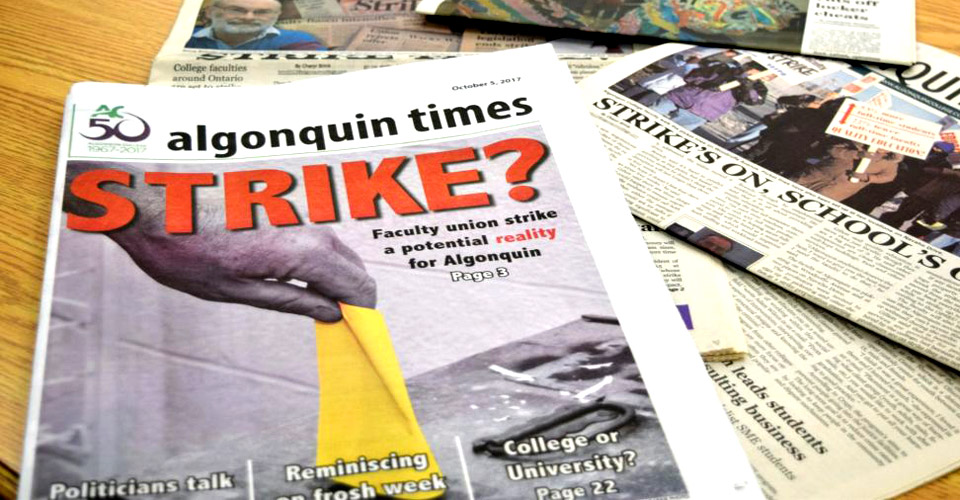 About half of the school papers have stopped publishing.
Article By Robert Hiltz
Share

The middle of a faculty strike can be an exciting place to be as a student newspaper reporter. All of a sudden, you’re at the centre of the most consequential story that’s likely to come your way, every one of your peers is affected by it, and you and your newspaper are the ones that know the beat best.

But for many student journalists, things aren’t so simple. When instructors at Ontario colleges walked out more than two weeks ago, many students were shut out of their newspapers entirely. At issue: the colleges and faculty union couldn’t come to an agreement over the use — or overuse, if you’re talking to faculty — of contract professors.

At least half of Ontario’s 24 colleges produce a student newspaper of some sort. And of those, about half have ceased publishing new material (on their respective websites, at least) since the strike began.

At the Algonquin Times* at Algonquin College in Ottawa, students found themselves in a curious situation. They were barred from making their newspaper or posting to their website by the Algonquin Students’ Association (SA), and so decided to put together their own newspaper.

The SA owns the Times, and while it has generally stood at a distance from the paper’s day-to-day operations, as publisher it has the ability to close the paper down. So it did.

In an email to the newspaper, shared with CANADALAND, SA office manager Jack Doyle explained the paper was being closed for the duration of the strike because it was faculty supervised. “It is a matter of respect for faculty and the collective bargaining process, and the Algonquin Times is no exception,” Doyle wrote. (When reached by CANADALAND, he declined to elaborate.)

This came as a surprise to Times staff, since the paper printed without interruption during a 2006 strike. “We didn’t really fully understand,” says design editor Stuart Kite, “because in 2006, when they went on strike before, the Times was allowed to operate as normal.”

So, in the interim, those that are able are publishing their own spin-off, Algonquin Timeless. “It’s been completely student organized,” Kite says. “We decided to keep it simple and do a website and a one-page flyer, a bulletin-style physical copy.”

“The adversity, to me, is an interesting opportunity to overcome something. It motivates me to work harder because you’re getting told, ‘You can’t do it,’ even though you can,” Kite says.

But across the province, not everyone has that extra help. And no matter the state of the newspapers, the one thing that seems likely is the strike will stretch on. After nearly three weeks on strike, it was only this Thursday that the two sides resumed bargaining.

That means across the province, the websites of many college newspapers have been frozen in amber. Take, for example, Durham College’s student newspaper, The Chronicle. The second story there? “Ontario college faculty could strike Oct. 16.”

The problem for reporters at The Chronicle is it’s fully integrated into the journalism program at the Oshawa-based college. Editor-in-chief Brian Legree is a member of faculty, and Durham’s School of Media, Art, and Design owns and operates the paper. In an email, Legree says because the paper is an entirely in-class product, it won’t be published during the strike.

For Cassidy McMullen, the Chronicle reporter who wrote about the then-impending work stoppage, it’s left her and other reporters in an odd limbo.

“It really sucks, to be honest,” she says. Many of their instructors have plenty of experience covering labour disputes, she says, but now students have no one to guide them through it.

When there appeared to be no end in sight for the strike, McMullen says they were given contacts at a local online news outlet to try and pitch stories, but they’re still so green, it’s tough.

“It started so early in the beginning of this semester when we’re just starting to do reporting on our own,” McMullen says. “It’s hard to give something over to another news organization when you’re like, ‘Well, my skills aren’t quite up to par yet.’”

An hour or so down the road, at Toronto’s George Brown College, things took a different direction when faculty walked out. Rather than being left hanging by the strike, reporters at The Dialog have been able to seize the opportunity presented. Because the paper is owned and operated by the campus students’ association, it’s produced outside of class. And because students don’t report to faculty, there’s nothing stopping them from publishing their paper like they usually would. The editor-in-chief of The Dialog, Steve Cornwell, says things at the paper have continued more or less as normal.

“The most significant change is that we’re really concentrating on the strike now. We see ourselves in a good position, providing information for George Brown students,” Cornwell says.

One of the biggest changes, he says, was the increase in the availability of reporters. Even those that have picked up extra shifts at work have been left with more time to devote to reporting for The Dialog.

McMullen, for one, sympathizes with the faculty, and thinks they’re justified in striking. “This sucks, obviously, that we have a strike, but they need to strike. There are fundamental problems with the way that contract faculty are being used in colleges.”

But while she sees her teachers’ side of things, there’s a pang of regret in there, too, a sense she and her peers are caught in the middle, and losing time they can’t get back.

“It important they’re doing it, it just sucks we’re missing out on the year [and] this time.”

* Disclosure: I was the editor of the Algonquin Times in 2010, the last time a strike vote came up. At that time, there was no strike nor any discussion of shutting down the paper if one did take place.