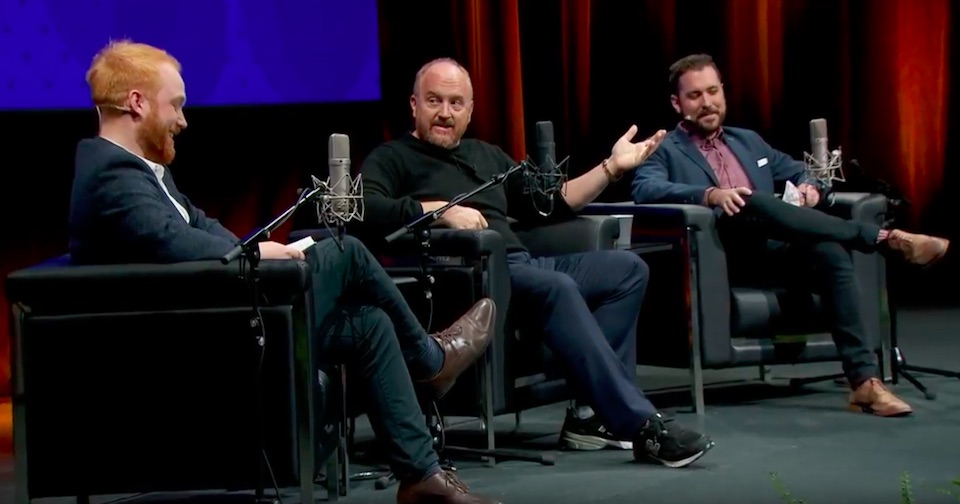 After The New York Times published its exposé on the comedian, TIFF scrubbed traces of a love-in at the 2017 festival.
Article By Graeme Gordon
Share

This story is an epilogue of sorts to our feature concerning TIFF’s 2014 rejection of a documentary that exposed sexual abuse in Hollywood.

“It might seem clear, but what inspired you to make this story?” Cameron Bailey asked Louis C.K. during the Q&A that followed the premiere of his film I Love You, Daddy at last year’s Toronto International Film Festival. Bailey is the artistic director of TIFF, who will also become co-head of the organization when longtime CEO Piers Handling retires later this month.

“I don’t know, I just started… [We] were just talking about the fascination of people there are stories about — people who you love in their work — people. And then it just sort of came up, well what if one was fucking my daughter?” said C.K. to laughter from the audience.

Many critics noted that C.K.’s I Love You, Daddy borrowed heavily from filmmaker Woody Allen’s works and personal life. The plot centres on an older, successful filmmaker seducing the teenage daughter of C.K.’s character.

In an hour-long live interview recorded for TIFF’s Long Take podcast, C.K. told the story of how he got his film into the festival by pulling some strings.

“I said, ‘Well do you have any room?’ [Bailey] said, ‘No, but send me the movie.’ And so he wrote me and said give me a call, and we talked, and he wanted — and he found the space for us. I mean, we shouldn’t be here. It’s not fair. It’s totally unfair to the real filmmakers,” said C.K. to more laughter.

“TIFF will often announce late selections. This is not unusual practice,” a spokesperson for TIFF said in an email. “The film was screened at the Festival two months prior to The New York Times report on November 9, and our programmers selected this film with the same curatorial lens applied to each work submitted to the Festival.”

“As far as TIFF went, I think they figured that Louis’s a big name, and this is his homage to Manhattan, he’s got a tonne of fans. He’s going to fill the place, which they did. And they weren’t really thinking beyond that, because everything else was still sort of — you had to read it in The Daily Beast or something,” says former longtime Toronto Sun film critic Jim Slotek.

C.K.’s misconduct had been discussed by many in the industry for years. As CANADALAND touched on in an episode late last year, Gawker and Jezebel were ahead of their time in writing about C.K. long before The New York Times’ exposé. But a couple days after the September 9 premiere of C.K.’s film at TIFF, the Times published a piece in which a journalist pressed C.K. about the (then-unsubstantiated) stories about his sexual misconduct. C.K. denied them, telling the reporter, “They’re rumours, that’s all that is.”

Yet on September 13, 2017, the Long Take podcast hosts — apparently either oblivious or indifferent to the parallels between the rumours and the movie’s content — were incredibly flattering to C.K. at a live taping of their show at the CBC’s Glenn Gould Studio.

Within a day of the Times’ November 9 story being published, TIFF pulled down the C.K. podcast and scrubbed traces of it from its site.

Some excerpts from that show:

Co-host Geoff Macnaughton, introducing C.K.: “He’s a filmmaker, a writer, a TV star, and he just happens to be the biggest comedian in the world. He’s here with his new film, I Love You, Daddy. Please welcome Louis Fuckin’ C.K.!”

Co-host Rob Kraszewski: “I don’t think these people are excited enough to see you.”

C.K.: “And then, I always wanted to come here with a movie. I always wanted my first feature that I’d take to a festival to be here. And I’m not trying to kiss your ass.”

Macnaughton: “You turned 50 yesterday. [audience applauds] So what does success look like for you at this stage in your career? Is this it?”

Macnaughton: “You’re kind of in the process of nailing it right now.”

C.K., on supporting a friend’s documentary: “…documentaries, they all end in tragedy. All of them. I mean for the filmmaker. Every documentary is like, ‘We went out for 10 years. And we lived — my wife died in the middle of it. [audience laughs] And we brought this truth to the world. And then we were a million dollars in debt.’ [Macnaughton laughs] I mean, it’s so hard.”

“TIFF removed the podcast with Louis C.K. recorded from our platforms since its content, told within the context of his film I Love You, Daddy, is diminished by the accusations and admission from Louis C.K. of his misconduct,” said the TIFF spokesperson.

At the festival, C.K. sold distribution rights to the film to The Orchard for $5 million. The studio planned to release the movie in November, but cancelled the run in the wake of the Times story, and soon sold rights back to the comedian.

“What’s bizarre about that is I think it shows the influence of celebrities. And if the Toronto Film Festival is so plugged in, I had heard of the rumours about Louis C.K. jerking off in front of other comics. You would’ve thought someone at the Toronto Film Festival would have heard that, too,” says Matthew Valentinas, a producer of An Open Secret, a documentary concerning sexual abuse of minors in Hollywood that had been rejected by TIFF in 2014.

“In general,” former longtime Globe and Mail film writer Liam Lacey writes in an email, “festivals and entertainment journalists, myself included, have helped promote works by many men convicted of crimes, charged with crimes but acquitted, not charged with but accused of crimes, and rumoured to have committed various crimes, both victimless and violent.”

“In the cases of sexual crimes, there has been a post-Weinstein cultural shift and I think both entertainment press and festivals are more conscious of how they have been complicit in rape culture. The shift has gone from a presumption of innocence of the accused men to a presumption that the accusers, mostly women, are telling the truth.”

This year, TIFF announced a policy of “zero tolerance” for harassment and abuse at the festival. Two of the women alleging sexual misconduct by Weinstein said the incidents occurred in past years at TIFF.

On the third day of the 2018 festival, TIFF also held a rally in support of women’s equality in the film industry.

Top image from a video of Louis C.K. on stage with TIFF hosts Geoff Macnaughton and Rob Kraszewski.