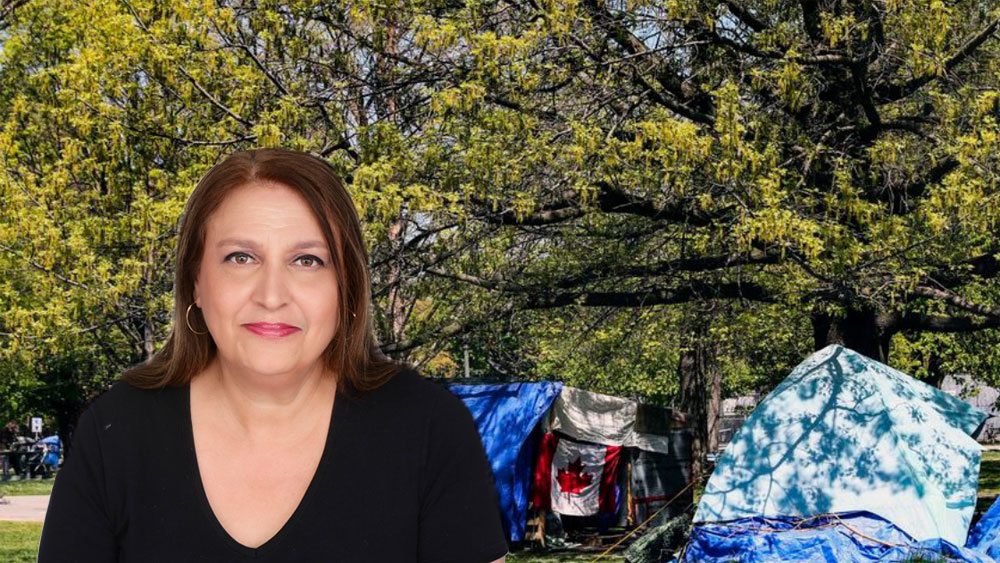 On May 17, the Toronto Star published a piece by Rosie DiManno recounting a night during which she, pretending to be an unhoused person, infiltrated an encampment at Trinity Bellwoods park. In the piece, DiManno, among other things, characterizes an individual who “shows all the signs of needing a fix” as a “menacing presence”; mocks an art gallery set up by residents as “childish”; and describes a couple who welcomed her into their tent as “reeking of weed.”

It would be easy to dismiss the column, which ran on the Star’s front page, as just another case of DiManno being DiManno: a writer whose greatest hits include using the term “n-word” in jest, outing a sex worker ahead of her good-character hearing before the Law Society of Ontario, and, most recently, calling the Star’s appointment of columnist Shree Paradkar as an internal ombud — an appointment meant to allow BIPOC journalists working for the Star to share editorial concerns they might not be comfortable expressing to their direct manager — ”a fucking abomination.”

But there is something particularly callous about DiManno’s decision to embed herself in the encampment, interview a number of residents, and quote them in the piece using their real first names, without identifying herself as a reporter.

The practice of gaining informed consent from interview subjects is one of the core ethical tenets of journalism. Letting interview subjects know that they are, indeed, being interviewed first allows them the chance to decline (or go off-record), and second makes them aware that any answers they give to questions they are asked can (and will) be made public. This does allow interviewees to tailor their answers, which can sometimes be frustrating to reporters. But it is the fundamental right of any member of the general public (and those in positions of political and/or economic power) to decide whether they wish to engage with journalists, and to what extent.

In not identifying herself as a reporter, DiManno eliminated two key obstacles for herself, and for her piece: the possibility that she would receive anything but full, uncensored candour from marginalized individuals who might otherwise treat her with skepticism, and the chance they would refuse to let her carry out her homeless cosplay experiment entirely. Conversely, she didn’t provide them with the chance to decide what they wanted to talk about — or, put another way, she didn’t allow them an opportunity to contradict the tired tropes and harmful stereotypes about unhoused individuals that her column perpetuates and enforces (and which she went into the whole exercise apparently ready to enforce: she writes that she packed a pocket knife for the assignment). DiManno fully dehumanized an already marginalized community, using them as pawns to support her own contrived narrative, instead of presenting them as actual people with their own stories to tell.

If DiManno’s column served any purpose aside from trivializing the lived experiences of encampment residents by centring her experience as a poverty tourist, it’s difficult to see. She doesn’t note how often the police tear these encampments down. There is no mention of the housing crisis in Toronto, or any interrogation whatsoever of how individuals living in encampments end up there, aside from a blanket statement where she categorizes “many” unhoused people as “suffering from some kind of mental illness.” Housing advocates in Toronto, such as the Encampment Support Network, have long expressed frustration at the limited media attention on the encampments and other housing issues, such as ongoing evictions during the pandemic. This doesn’t help.

There are instances where going undercover as a reporter is appropriate. Per the Star’s own journalism standards: “Undercover reporting, photography, and surveillance video should be used rarely, and a case must be made that the story to be uncovered is of significant public interest and the event to be investigated is a sustained, consistent practice, not a ‘gotcha.’ Advance approval by senior editors of any undercover work is required. In such cases, the extent of and reason for the deception should be clearly communicated in the resulting published reports.”

The Star column, a first-person meditation on just how uncomfortable a columnist felt around unhoused people, is not of significant public interest. While the encampments themselves are ongoing issues — and the city’s mismanagement of them is a sustained practise — DiManno’s piece doesn’t address any of this; her reporting is more “gotcha” than anything. By way of contrast, the same story can be done through above-board reporting on encampments. Global News’ Jeremy Hunka spent the night in a Vancouver encampment in 2014 and wrote a respectful and ethically sound piece.

And while she disclosed the deception in her Star piece, by way of explaining why interview subjects were only identified by first name (although, since subjects weren’t asked to consent to an interview, they couldn’t have been asked to consent to their first names being used, either), there’s no disclosure of the reason for the deception. Blatantly disclosing that the deception took place for the purpose of exploiting vulnerable sources presumably would not have been something the Star wanted on the public record.

This comes across as the sort of clear-bias journalistic malpractice that makes members of the general public distrustful of, if not vehemently disdainful towards, members of the press. It’s gotcha journalism, the type of high-gimmick, low-tact novelty storytelling that shouldn’t pass muster as reporting. And maybe DiManno’s editors knew this: she wrote in the piece that the column was produced “over editor objections.” It’s unclear, though, what those objections were, and neither the Star’s EIC, Anne Marie Owens, nor comment editor Andrew Phillips responded to Canadaland’s requests for comment.

After the piece was published, a Twitter user and encampment resident with the username @Grusomebrat published a widely-shared thread decrying the column as dehumanizing and violent. In the replies, another user suggested that at some point during her stay, DiManno was in fact recognized as a reporter. She was told to leave.

Photo is adapted from the original