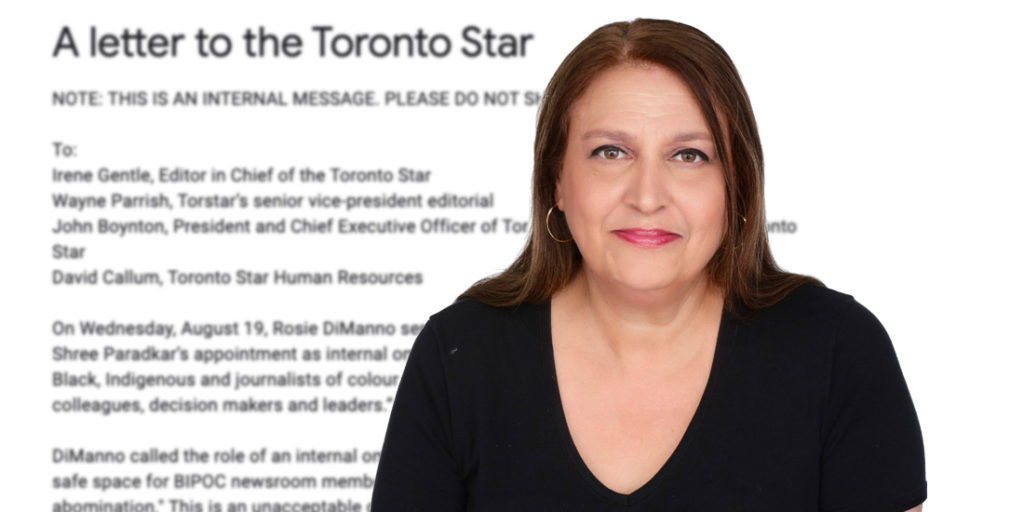 “Degrading And Aggressive”: Star Newsroom Rises Up Against Rosie DiManno

On Wednesday, August 19, Toronto Star editor-in-chief Irene Gentle sent a memo to her newsroom, announcing that columnist Shree Paradkar was being appointed to a part-time post as the paper’s first-ever “internal ombud.”

“This role will provide a safe place for BIPOC journalists and all journalists to express editorial-related discrimination and bias concerns if they don’t feel comfortable bringing it to their manager directly,” Gentle wrote in the message, later published on J-Source. Such concerns, she explained, could involve the framing and presentation of articles, headlines, photos, captions, social media posts, and even assignments.

Less than an hour had elapsed when the longest-serving columnist at the Star blasted a reply-all to her co-workers.

“This is a fucking abomination,” she wrote, “and I will not submit to yet another level of interference in an insanely over-micro-managed newsroom.”

But as far as the newsroom could tell, the A-section fixture had escaped official rebuke.

And so, fed up with what they viewed as a pattern of conduct, 62 of her colleagues signed a letter to Star management describing DiManno’s email as “an unacceptable denigration of the concerns and experiences of BIPOC newsroom members” and “an example of the kind of racism, institutional and otherwise, that prompted the need for Paradkar’s position” in the first place. Sent on Tuesday, it was addressed to Gentle, Boynton, Parrish, and HR director David Callum. (The full text is below.)

“DiManno has been degrading and aggressive to members of multiple departments and has never faced repercussions that we have seen, given their continuous occurrence,” said the letter, signed by journalists from across the newsroom, from radio-room interns to high-profile beat reporters, from team editors to staff photographers. “This bullying happens over the phone, in direct emails, and out in the open. Our managers have not acted. We are all aware of the pervasive abuse these teams have been subjected to. We feel this impunity reflects a larger culture at this newsroom.”

They want Star management to condemn DiManno’s comments, enforce her “participation in anti-racism training,” and for her to “apologize to the newsroom and demonstrate an understanding of why these measures are necessary.”

Asked if she’d like to elaborate on her objection to Paradkar’s appointment or respond to her colleagues’ letter, DiManno tells Canadaland in an email, “Nah. But thanks for asking.”

The Star did not respond to requests for comment.

Among those who didn’t sign the letter were members of the Star‘s bargaining-unit executive, for whom doing so might pose a conflict. They represent approximately 150 editorial employees.

“Where there are member-on-member complaints, the executive has to recuse itself,” reporter Jim Rankin, chair of the Star unit at Unifor 87-M, says in an email. “In circumstances where formal action is taken by management in these scenarios, members will be supported through an outside third party facilitated by Unifor. We are committed to ensuring a safe and respectful workplace.”

(DiManno herself has stated she doesn’t think unions belong in newsrooms, “which are always undemocratic domains.”)

A journalist at the Star since 1975 and a columnist since 1989, DiManno is perhaps the sole Canadian newspaper writer to have been derided on separate occasions by Gawker (for “the worst lede of all time”), Jezebel (for outing a sex worker), and Deadspin (for chalking up an underwhelming ice-dancing score to an elaborate U.S-Russia conspiracy).

She’s said that cyclists take first place on her “list of People Who Should Be Shot” (a comment found acceptable by the Star‘s public editor) and casually cracked that Nevada’s sizeable Filipino population must be due to a “high demand” for nannies (found to be less so). Editors at the paper have covered for her by fixing a factual error without informing the public editor’s office so that a correction could be issued, and by quietly removing a racial slur from her copy following its initial online publication.

She has written, “If I had a gun (actually I do), I would shoot you, Craig,” about Craig Newmark, founder of Craigslist; threatened the Sun’s Joe Warmington that she’d “rip [his] fucking throat out”; and that if she were ever to run into Lynn Crosbie, author of a fictionalized book about serial killer Paul Bernardo, “I will rake my fingernails across her face.”

DiManno was charged with assault following a 2016 incident in Hastings County; the count was dropped the following year when she entered into a peace bond.

“Readership studies indicate that Rosie DiManno is one of the Star’s most popular column” (sic), then public editor Kathy English explained in a 2018 Reddit AMA.

“A propos nothing at all,” Paradkar tweeted Tuesday morning, before news of the letter had broken, “I’m here to say I LOVE and support young journalists slicing through layers of obfuscation and challenging the old guard on issues of social and racial justice.”

DiManno leads column with joke about "the n-word."

She responds, "You don't own words!" pic.twitter.com/M0uj1DGjlX

Full text of “A letter to the Toronto Star,” sent Tuesday morning:

On Wednesday, August 19, Rosie DiManno sent a hateful, racist reply-all email in response to Shree Paradkar’s appointment as internal ombud as “part of developing structures to ensure Black, Indigenous and journalists of colour have a way to be safely and clearly heard by colleagues, decision makers and leaders.”

DiManno called the role of an internal ombudsperson — a position developed to create a safe space for BIPOC newsroom members to raise editorial concerns — a “fucking abomination.” This is an unacceptable denigration of the concerns and experiences of BIPOC newsroom members; it is in effect an example of the kind of racism, institutional and otherwise, that prompted the need for Paradkar’s position. When one of the most tenured and powerful journalists at the paper openly repudiates the very idea that BIPOC journalists can benefit from a safe outlet for their concerns, it reinforces how those journalists may not feel safe, valued, or equal in the newsroom.

DiManno has been degrading and aggressive to members of multiple departments and has never faced repercussions that we have seen, given their continuous occurrence. This bullying happens over the phone, in direct emails and out in the open. Our managers have not acted. We are all aware of the pervasive abuse these teams have been subjected to. We feel this impunity reflects a larger culture at this newsroom.

In the wake of DiManno’s reprehensible comments, only one staff member addressed DiManno’s behaviour directly. This speaks to the invisible hierarchies in place in the Star newsroom. Afterward, Wayne Parrish and John Boynton sent an email expressing support for Paradkar. We want them and other senior managers at the Star to publicly condemn DiManno’s comments. Failure to do so suggests that some in this newsroom follow different rules than the rest of us.

Additionally, if our predominantly white newsroom leaders do not address this, it clearly reinforces the need for Paradkar’s appointment as internal ombud. Any actions taken with DiManno to privately address her conduct do not sufficiently address the harms she has caused. The damage created by her reply-all email is newsroom-wide, and actions to counteract that damage should similarly be newsroom-wide.

The Star has expressed a commitment to anti-racism, pledged to listen, learn and take meaningful action. We ask that the company do so now.

We insist management enforce DiManno’s participation in anti-racism training, for DiManno to apologize to the newsroom and demonstrate an understanding of why these measures are necessary.

Signed, the impacted and supporters of those impacted:

[62 names and their respective job titles]