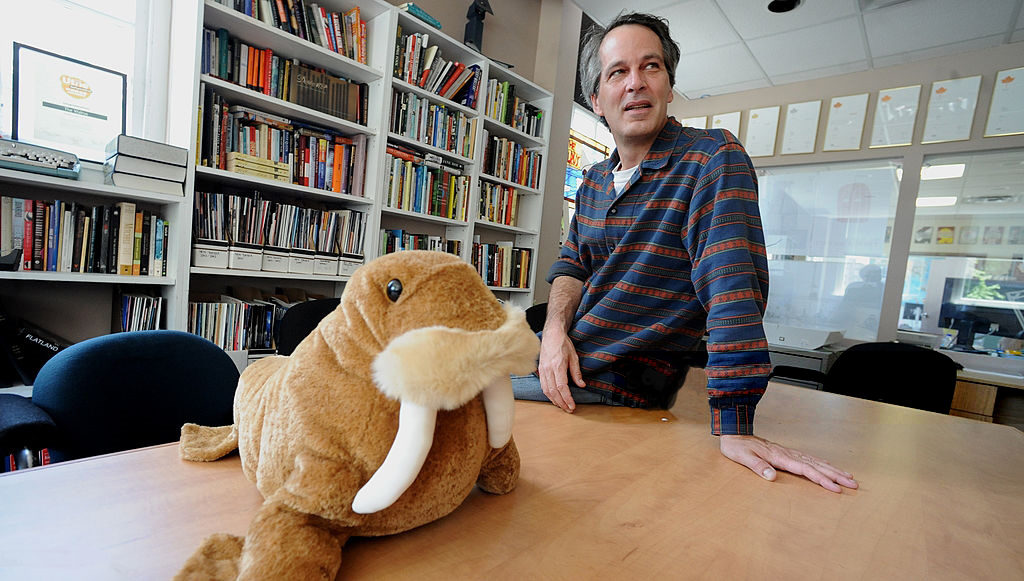 The Walrus Foundation failed to meet the obligations it made to the government in order to gain and maintain its status as a registered charity, said the Walrus magazine's co-founder.
By Jesse Brown
Share

The Walrus Foundation failed to meet the obligations it made to the government in order to gain and maintain its status as a registered charity, said the Walrus magazine’s co-founder.

(Listen to our podcast interview with Ken Alexander here. )

Ken Alexander founded the Walrus in 2003 with David Berlin. Alexander later served as the magazine’s editor and publisher. He and his family’s Chawkers foundation donated $5 million toward its initial operation and navigated the process of having the Walrus Foundation designated a charity by the Canadian Revenue Agency. As a charity, the Walrus has tax-exempt status and can collect tax-deductible donations.

Ken Alexander provided CANADALAND with a 2005 letter from the CRA to the Walrus’ lawyer (PDFs below) in which the government agency sets out in detail the “operational requirements” the Walrus Foundation must maintain to remain a charity. We reached out to both the Foundation and Shelley Ambrose, the publisher, for comment on this story and, if there is one, an updated version of the agreement. We’ve received no response.

Alexander said the Walrus failed to perform some of the obligations laid out in the CRA document, “in direct violation of the charitable status agreement.” He said the magazine did not maintain its educational content requirements, the Walrus Foundation cancelled a national book giveaway program for high school students, and the magazine cancelled its original paid internship program, in which interns from around the country were paid a living wage and given bi-monthly journalism workshops.

“On the strength of these ‘activities,’” Alexander said, “we got charitable status.”

The Walrus replaced its paid internship program with an unpaid program, which the Ontario Ministry of Labour shut down in 2014. The Foundation was fined for violating labour law and Walrus interns are now once again paid for their work.

The CRA’s 2005 letter also describes other charitable initiatives of the Walrus, including an annual $10,000 non-fiction book prize and a university student essay contest with cash prizes. Unlike the paid internship and high school literacy programs, these activities were never cancelled, because, it seems, they were never initiated. “To my knowledge,” Alexander said, “these were also ignored or, at least, not attended to.”

The document specifically forbade the Walrus magazine from publishing advertorial content. Today, the Walrus regularly runs “supplements” sponsored by partners like the World Wildlife Foundation, who have editorial input on the articles the Walrus produces for these features.

Ken Alexander tells CANADALAND that a year and a half after he resigned his post as the Walrus’ editor due to a “toxic” work culture and “abuse” of workers from publisher Shelley Ambrose, he attended a Chawkers foundation meeting at his ailing father’s request. There, Shelley Ambrose and new Walrus editor John Macfarlane updated the foundation on the progress of the magazine. According to Alexander, at that meeting Ambrose misrepresented the Walrus’ circulation and withheld information about a complaint made against the magazine to the Ontario Human Rights Commission.

“It was a complete sham,” said Alexander, “[the Walrus Foundation] taking Chawkers for unwitting fools. I took real umbrage at my father being lied to.”

A representative of the Canadian Revenue Agency told CANADALAND that if registered charities want to change their purpose or objects (their activities), they must ask for permission first. CANADALAND repeatedly asked the Walrus if it has successfully changed its charitable status agreement with the CRA. We didn’t receive a response.

Without comment from the Walrus, the full story remains unclear. We don’t know whether there were changes to the CRA agreement or if the deviation from the original one was approved by the board. It’s unclear who made the decision to shut down the paid internship and high school literacy programs or run the advertorial content. We will update this story if the Walrus responds to our questions.

Though the Walrus has yet to respond to CANADALAND’s inquiries, we did ask the Canadian Revenue Agency to send us the most recent versions of the Walrus’ governing documents.

While these do include a 2006 amendment freeing the Walrus from obligations to conduct original research and provide scholarships and bursaries, no other changes appear.

As these documents describe, the Walrus Foundation is currently obligated to provide an annual $10,000 non-fiction book prize and annual cash prizes for student essays, and to “adhere to an educational content versus other, including advertising ratio of at least 70:30.”

Ken Alexander provided a timeline of events at the Walrus. Below is his account, edited for length and clarity.

After more than three years of arguing with the Canada Revenue Agency, the Walrus Foundation is granted charitable status. It was an epic battle. Along the way certain people were heroic, perhaps none more so than my father, Charles Alexander. Beyond the pro forma obligations of any Canadian charity, there were (and I believe still are) four “activities” WF was/is obliged to offer and/or perform in order to retain its charitable status. Those activities are:

1. Publishing a magazine ten times per year with an editorial (and art) to non-editorial ratio of at least 70:30. All editorial and art pieces must be vetted by an educational review committee of university professors to make sure that they qualify as educational. Profiles and strictly personal journalism in the form of memoirs are specifically excluded (non-educational). The magazine must regularly feature long-form investigative journalism, and can publish humour (that is educational), crossword puzzles (and other “brain games”) that meet a high educational standard.

2. Under “training” WF must offer fully-paid ($2,000 a month, plus benefits) six-month internships to four editorial interns and one art intern. The interns must be given a full educational experience and be selected from across Canada.

3. Under “youth literacy” WF must (continue to) operate “Bookshelf,” a unique annual program of evenings in twelve Canadian cities — from St. John’s to Victoria — attended by public high school English and History teachers that results in 24,000 books per year given to deserving graduating high school students. Note: Bookshelf was started years before WF and was funded — about $350,000 a year entirely by Chawkers, the foundation established by my mom and dad.

4. Under “conferences” WF must host a minimum of one conference per year on a critically important matter of public policy.

As a condition of charitable status I step down from all boards, and become a simple (fireable) employee — the editor. I no longer have any management or publishing responsibilities, a relief. It would be accurate to say, I think, that I was useless at both.

Shelley Ambrose is hired as publisher and executive director of WF. At the request of the board I write her employment contract. It stipulates that she must ensure all the terms and conditions of the charitable status agreement are observed and executed.

The new publisher [Shelley Ambrose] strips the large direct mail campaign of its direct anti Conservative wording. (The returns from this campaign were poor, a first.)

Without any warning, Bookshelf [high school literacy program] is cancelled. I state that this is in direct violation of the charitable status agreement.

The paid internship program is cancelled. Again, I state this is in direct violation of the charitable status agreement, adding that, in my view, this move was probably against the law and basic employment standards practices. I am told that “unpaid internships are the industry standard.”

June 2007
I submit a letter of resignation to Allan Gregg. He pleads with me to stay, that fundraising will get up and running, etc., and I agree.

Editorial, Art, and Adverting are given the book-size plan for 2008. It could scarcely be a more robust program, and my spirits are buoyed.

A letter to the editor arrives criticizing Bruce Livesey’s piece on income inequality (July–August 2007). I am told [by Shelly Ambrose] not to run such editorial again.

This book-size plan is abandoned, the advertising dept. blamed.

The publisher [Shelley Ambrose] says I should [run] profiles on the wives of mayors in the upcoming “cities” issue (Jan-Feb. 2008).

Under the new regime there has been to date little to no fundraising done.

The boss [Ambrose] takes 3 foreign vacations — to the Caribbean, Italy, and Scotland. Upon her return from her last vacation, the entire staff is blasted (in an email) for abusing sick-day privileges. As far as I could tell, one person had taken one day off (with the flu).

Marni Jackson and Nora Underwood (who shared one full-time position, but put in much more time than that) request six-month leaves of absence. By this point, the office had become toxic. I am allowed to hire a replacement, Sylvia Barrett.

Just before the National Magazine Awards I submit my letter of resignation. I’m spent, done, and simply cannot any longer tolerate the abuse of staff. If I had to pinpoint one thing, it would be the treatment of Sylvia Barrett, a good person. This was just a bridge too far.

A year and a half after leaving the Walrus I attend a Chawkers [Foundation] meeting. My father wants me back involved, he is ailing. Four representatives from the Walrus Foundation address the meeting — Shelley Ambrose, John MacFarlane, Allan Gregg, and Mary Cranston. [Shelley Ambrose] tells Chawkers that the print subscriptions and newsstand circulation is 60,000. I know for a fact that it is around 35,000. Chawkers is also told about great fundraising successes, a staff that could not be better or happier, etc. There is no mention of staff departures, a case before the Ontario Human Rights Commission, the fact that the newsstand sale had absolutely crashed and that the subscription file had shed nearly 10,000 subscribers, etc. It was a complete sham, [Walrus Foundation] taking Chawkers for unwitting fools. I took real umbrage at my father being lied to.

UPDATE: Since we posted this article and the accompanying podcast, the circulation numbers claimed by Ken Alexander have been disputed on Twitter, where CCAB (Canadian Circulation Audit Bureau) audits were cited. These audits say that in fiscal 2008 (published in March 2009) the Walrus’ circulation was a total of 51,000 while in fiscal 2009 (published in march 2010) it was about 48,000.

Ken Alexander said he stands by the numbers he provided CANADALAND, which were given to him by an employee of the Walrus working in the circulation department. He responds:
“Lots of magazines inflate their circ. numbers, but the numbers that count — in my view — are bona fide subscribers and newsstand buyers. I know nothing about anything else (on-line subs, what the CCAB requires to call a sub a sub, giveaways, etc.) I do know that at that December 2009 meeting, when asked directly about print subscriptions and newsstand buyers Chawkers was told: ‘60,000 and the November 2009 newsstand edition is on track to be our best yet.’ This was horseshit, plain and simple.”

Walrus Objects of the Foundation

Contract of the Executive Director and Publisher