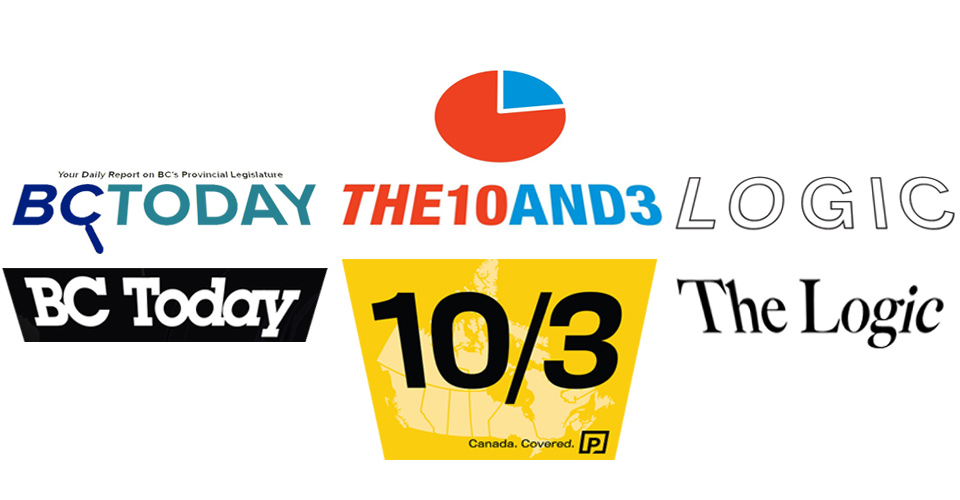 What Happens When Another Media Outlet Takes Your Name

While each may be a promising venture in its own right, they also share an unfortunate distinction: all three have names that are identical or nearly identical to those of existing publications, whose respective publishers were unhappy to find out about their new nominal doppelgängers.

The CBC’s BC Today looks at “the top story for the province” each weekday, but the name of the show was already being used as the title of a digital newsletter reporting the goings-on at the BC legislature. Allison Smith founded BC Today back in September 2017 as a spin-off of Queen’s Park Today, her newsletter covering the Ontario legislature since 2012.

“I tried to figure out how to trademark it, but basically that takes two years and would not even force them to change it without legal action,” says Smith, “so I have decided it’s not worth it.

“It could have been an accident, but a simple Google search would have found it, and there are very few media outlets in BC. Like, I checked to make sure the name wasn’t taken before I selected it.”

CBC’s head of public affairs, Chuck Thompson, explained to CANADALAND the process involved when choosing the name of a show.

“When naming a show, we sometimes do research and always do a title search, but in this particular instance, we didn’t think anyone could have copyright over ‘BC’ or ‘Today.’ ‘BC Today’ was chosen because it perfectly encapsulates what the show is about. It’s also very much in line with the name of other similar CBC shows across the country.”

Smith says she feels annoyed about the public broadcaster using the same name as her registered business.

“[I’m] empathetic to my reporter Shannon Waters, who gets lots of questions about it.”

Hi — Is this serious?

How is it OK to release this podcast, using our name, on the same day that our work is taken, without our permission, across the Post Network? cc @AnneMarieOwens @JesseBrown @simonhoupt https://t.co/vnHl8WOCtQ

Arik Motskin is a co-founder and editor of The 10 and 3, a Canadian data journalism website that “tell[s] compelling and unusual stories about Canada through maps, interactive charts and other interesting visualizations.” (Both titles are references to Canada’s provinces and territories.)

Motskin noticed on Friday that not only had Postmedia come out with a new podcast with a very similar title to his website, but the National Post had also just published a piece borrowing from The 10 and 3’s data report on Canadian regional colloquialisms, with credit to the site only offered at the bottom of the article.

National Post editor-in-chief Anne Marie Owens reached out to Motskin to inform him that credit was supposed to be at the top of the article, but a technical error had caused it to appear at the bottom when first published online. Credit is now given near the top. Owens also told Motskin and CANADALAND that the 10/3 podcast was created independently of the Post and its article.

“We would have been more than happy to work with [the Post] collaboratively,” says Motskin, “and so we found it strange that they based this piece on our work (even if they did give us some credit). It seems like an unusual way to go about doing things.”

Hi, the name of the podcast was worked on by me with colleagues in my newsroom in Edmonton. The Post is helping us distribute it.

“Our podcast is a national Postmedia podcast produced out of the newsroom of the Edmonton Journal, highlighting stories and analysis from across our chain,” says Journal managing editor and 10/3 host Dave Breakenridge. “In trying to offer a show highlighting stories of national interest, featuring work from across the country, we wanted to come up with a name that represented Canada. After brainstorming a list of names, the consensus among the group involved with the project was 10/3.”

“Once we had settled on a name, we searched Apple Podcasts, as well as googling the two variations on the name we were considering, 10-3 and 10/3. Our Apple podcast search came up empty, and nothing was apparent on those two Google searches when we looked.”

“I actually just think it’s a coincidence,” says Motskin about the podcast name, upon reflection. “We certainly checked naming extensively when we first came up with our name.”

Wow. Any idea whether there are actions we can take about this?

A third example involves an American print and digital magazine called Logic, which has been doing in-depth coverage of the tech world for two years. Logic’s co-founder and editor, Moira Weigel, took exception when the Canadian website The Logic — “in-depth reporting on the innovation economy” — launched in mid-June.

“We feel extremely fortunate to have received some U.S. coverage of our digital publication. We’re a small bootstrapped news site based in Canada, focused on in-depth reporting on Canadian innovation,” says The Logic CEO and editor-in-chief David Skok.

“The name is a nod to the Canadian foundations of machine learning and artificial intelligence. The primary code base for AI, prior to Canadian-based scientist Geoffrey Hinton developing neural networks, was based on logic. The name was a subtle acknowledgement of Canadian innovation in one of the most exciting fields of technology and innovation, and the importance of logical, fact-based reporting that is core to our mission. ‘The’ was a nod to The Athletic and The Information — two sites that we are deeply influenced by, which, like us, are centred on daily, digital subscription-based reporting.”

Despite complaints from the earlier publications’ creators, IP lawyer Richard Owens doesn’t see any of the above examples having a legitimate copyright infringement claim.

“Unlike the US, it is possible to have copyright in titles in Canada, but all of these examples wouldn’t qualify, they are too short,” says Owens, a University of Toronto professor and senior fellow with the Macdonald-Laurier Institute. “However, they would be protected by Trademark law, especially if they were registered trademarks, but also at common law. I don’t know if these names were registered, but they should have been — unless they were also previously copied.”

He adds that “a trademark must be ‘distinctive’ to be registered and effective, not ‘descriptive.’ ‘BC Today’ is a fine name but because it describes what it’s about — BC news today — it isn’t distinctive enough to be protected as a trademark.”

This isn’t the first time a Canadian media outlet has taken the name of another, although in a previous case, the founders of the original publication copied their own name for a new venture.

“We’re the original Frank, started in 1987 by three people: British expat journos David Bentley and Lyndon Watkins along with local gal Dulcie Conrad,” says Andrew Douglas, the managing editor of Halifax’s Frank magazine. “A few years later, they oversaw the birth of the Ottawa edition of Frank, with Michael Bate. We’ve been under separate ownership since the mid-90s, I think it was, but that’s how it all started.”