What the Hell is Going on in New Brunswick?
Sign up for our newsletter 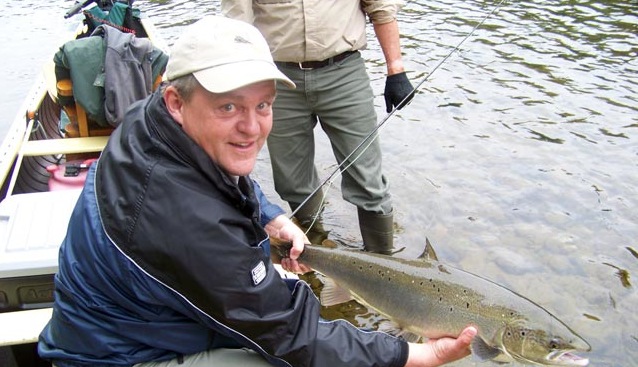 What the Hell is Going on in New Brunswick?

So what the hell is going on in New Brunswick? Two senior editors at the Moncton Times and Transcript have been sacked after CANADALAND started asking questions about one of them- Murray Guy. Turns out that Guy covertly traveled to Larry's Gulch, a remote, goverment owned fishing resort to meet with the head of New Brunswick's government-owned Liquor company.
By Sean Craig
Share

So what the hell is going on in New Brunswick?

Two senior editors at the Moncton Times and Transcript have been sacked after CANADALAND started asking questions about one of them- Murray Guy. Turns out that Guy covertly traveled to Larry’s Gulch, a remote, government-owned fishing lodge to meet with the head of New Brunswick’s government-owned liquor company.

So a newspaper editor went there. Why is that a scandal?

Newspaper editors really shouldn’t be traveling as guests of the government to clandestine meetings with powerful government bureaucrats for secret conversations, the purpose and content of which never get reported.

No. Prior to this revelation, the Times and Transcript and other papers owned by Brunswick News Inc (BNI) had been crusading for the government to publicly disclose the Larry’s Gulch visitor’s logs. They ran over 10 pieces demanding transparency. Then BNI reporter Shawn Berry discovered BNI editor Murray Guy’s name on the logs, and BNI’s crusade promptly stopped. Oops.

Yes. Once BNI found out that CANADALAND was poking around, their Editor-in-Chief Patrick Brethour launched an internal investigation. BNI’s ombudsman reported the details of the investigation. Patricia Graham says the news organization found that editors Murray Guy and his boss Al Hogan tried to cover up the whole thing by enlisting Darell Fowlie, an aide to then-New Brunswick Premier David Alward, to doctor the government’s records and scrub Guy’s name from the visitor log. Screwing with government records is a crime.

UPDATE: Larry’s Gulch logs obtained by L’Acadie Nouvelle last year and released on their website today do not contain a booking from NB Liquor, so it is possible additional names were taken off the list.

UPDATE UPDATE UPDATE: Murray Guy was at Larry’s Gulch with David Alward in 2013, when Alward was the Premier of New Brunswick. Wow. They were among several guests who stayed at the resort from July 17-19. Neither of their names appear in the logs obtained by L’Acadie Nouvelle and it looks like everyone who was there that weekend had their names wiped from the public record. All this from the Telegraph Journal.

CBC News further details how the booking was treated “differently” than others by NB Liquor. In 2012 and 2014, bookings by the publicly owned crown corporation appear on the log, but a trip with a BNI editor did not.

That all sounds pretty juicy, but it would be even better if a family of secretive billionaires were somehow involved.

You’re in luck. Brunswick News Inc is owned by the Irving family, the 3rd richest family in Canada. The Irvings employ something like 1 out of every 10 people working in New Brunswick. We did a podcast about them a few months ago called The Family that owns New Brunswick.

The Irvings are huge in forestry, oil, energy, fishing, media and shipbuilding. They are the primary industrialists in the province. The fact that they have a virtual monopoly on English-language media in New Brunswick lead a Senate Commission to call the province “a journalistic disaster zone.”

Neat. But they’re probably well-removed from this mess, no?

No. They’re right in there. Jamie Irving is the publisher of BNI. According to Jacques Poitras, he hadn’t spoken to the press in 12 years, but when we approached him for comment over the weekend, he wrote right back, telling us BNI was investigating itself and BNI had more info to come. Then came the firings on Monday, along with the ombudsman’s front-page statement, which kind of shockingly revealed that Jamie Irving himself was in on the decision to not run a story about the fact that his editor had been a guest at Larry’s Gulch.

It’s not clear from the ombudsman’s report at what point during BNI’s eleven day investigation Jamie Irving found out that his employees were trying to get the Premier’s office to doctor official records.

It’s looking very possible. The independent New Brunswick paper L’Acadie Nouvelle revealed that it secured Larry’s Gulch visitors’ logs last year. The copy they recieved did not have Murray Guy’s name on it, and we now know for a fact he was on the original logs, so….

By the way, we still don’t know who else was there with Murray Guy, apart from the head of Crown corporation NB Liquor and, of course, Premier Alward.

UPDATE: Anne Bertrand, New Brunswick’s access to information commissioner, is considering launching a formal investigation into alleged tampering with the Larry’s Gulch guest list. Trevor Holder, who was the minister responsible for Larry’s Gulch in the Alward government, has denied any prior knowledge of the affair. Alward says he didn’t know anything either.

“Privacy” is why, they say. The government put out a statement yesterday saying their goal is to release everything, but they need to make sure that they won’t be breaking privacy legislation in doing so. Powerful public servants meeting with stakeholders in publicly owned fishing lodges deserve privacy, too, you know.

Premier Brian Gallant’s government, understandably, also needs time to assess whether the documents it has on hand were in any way doctored or altered by the previous administration.

So what’s CANADALAND trying to figure out next?

First and foremost, we want to know what Murray Guy was doing at Larry’s Gulch. Was he there as a journalist, as an employee of the Irvings, for his own recreation?

We want to know what then-Premier David Alward was doing there with the head of NB Liquor and a BNI journalist, among others.

We want to know if Larry’s Gulch was illegally used for partisan purposes by the NB Progressive Conservatives, as this report in L’Acadie Nouvelle suggests.

We also want to fully know what role BNI management played in all this. According to their ombudsman, Murray Guy also visited Larry’s Gulch in 2008. This trip, Guy says, was approved by senior management at the company (!). So did anyone in BNI management know about and approve that trip?

Finally, we want to know what impact these meetings had on Brunswick News’ journalism. We asked BNI if they intend to conduct an investigation into the Times and Transcripts’ coverage of NB Liquor and the Alward government during Hogan and Guy’s tenures at the paper. They didn’t answer the questions, directing us instead to their ombudsman’s statement, which doesn’t answer the questions.

So will any of this actually come out?

Let’s hope so. CANADALAND is chasing for follow-ups, L’Acadie Nouvelle is kicking ass on this story (follow their reporter Pascal Raiche-Nogue here), and CBC New Brunswick is on it too (follow Irving vs Irving author and CBC NB reporter Jacques Poitras here and here and his colleague Dan McHardie here).

And again, the Premier’s office has pledged to release the Larry’s Gulch logs as requested by media in a timely manner.

But the easiest thing would be for Brunswick News to just release the logs themselves. Their reporter Shawn Berry got a hold of them in 2013, which is how this whole thing started. He works for the provincial government now (look, it’s a small province) and won’t answer our emails, but his files may well still be in the hands of his old paper.