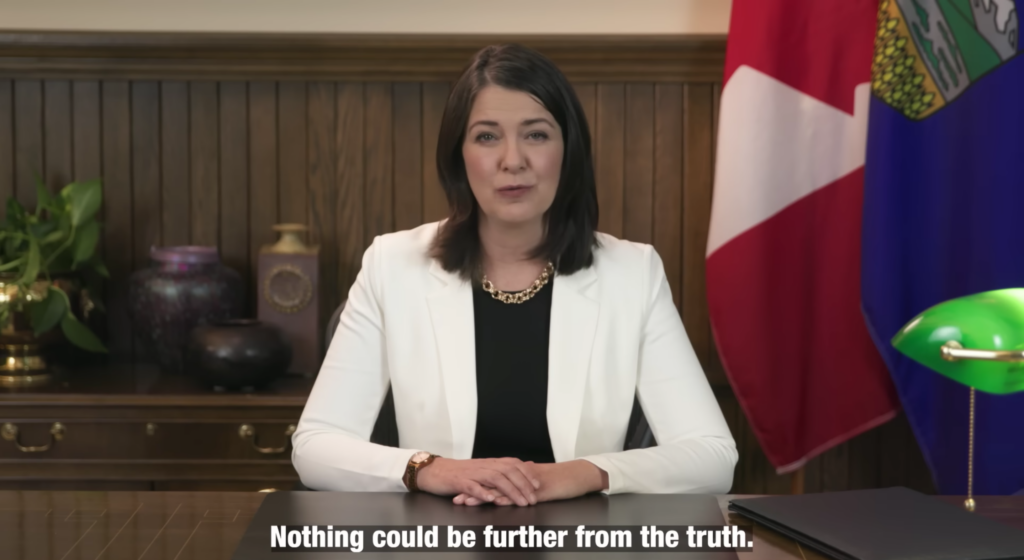 The government of Alberta paid two television broadcasters, Corus and CTV, to air a nine-minute message from premier Danielle Smith to Albertans this week, Canadaland has confirmed. The payment to Corus was not disclosed to viewers.

Premier @ABDanielleSmith will speak to Albertans tonight at 6:30 pm to provide an update on our government’s vision and plans for the province.

Watch on Global or CTV, or online at https://t.co/nHI0wKOEYd pic.twitter.com/0Zu7ksMpmH

Global News spokesperson Rishma Govani confirmed that the premier’s address was produced for an unknown fee by Corus, the parent company of Global News.

Danielle Smith worked as a pundit and radio host for Global News’ Corus Radio for six years before returning to politics. She departed in February 2021, citing her belief that “too many topics have become unchallengeable (to) the mob of political correctness” as the reason why.

Govani said that the segment was “produced by Corus Creative Services, which is a distinct commercial production agency within Corus. Global provided the feed to other broadcasters…Corus Creative services won the bid for the contract to shoot the address the way any other business would bid on services provided to the government.”

Govani did not answer questions about how much Corus was paid. She told Canadaland that there was no need to disclose to viewers that the premier’s broadcast was paid content, because Global News was not the specific entity paid for it.

CTV News spokesperson Rob Duffy told Canadaland in an emailed statement that “Alberta Premier Danielle Smith’s address was purchased as commercial time by the Government of Alberta, and aired during a commercial break on both CTV Calgary and CTV Edmonton. A slate was aired both in advance of and following the address, which clearly stated that it aired as paid advertising.”

Danielle Smith did not immediately answered Canadaland’s questions about the broadcast.

(11/24/22 6:40pm ET) This piece was updated to include further comments from Corus and comments from CTV, both of which arrived after initial publication.