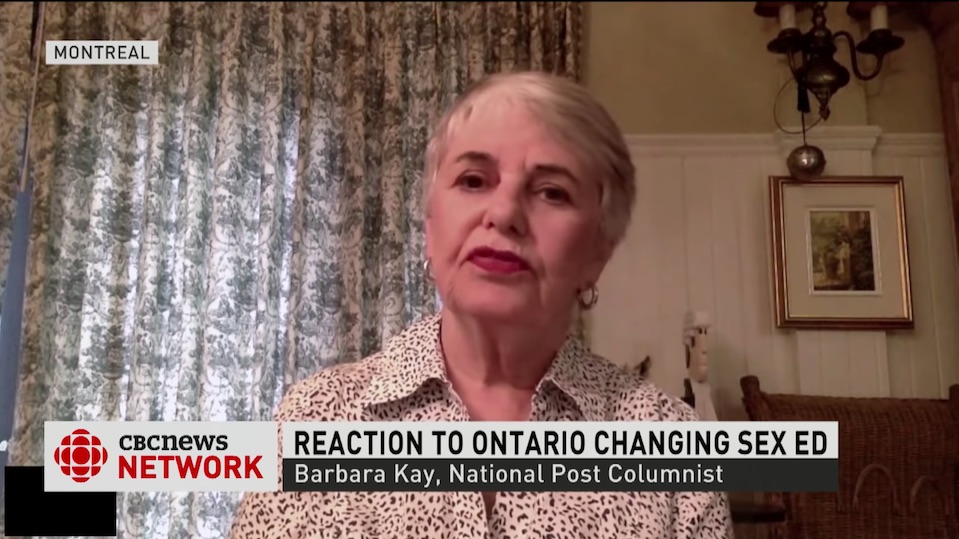 The line, which she and others have misattributed to Voltaire, was originally penned to justify criticism of Jews.
Article By Jonathan Goldsbie
Share

The following week, the National Post columnist delivered an identical statement in the introduction to her speech at an event concerning the “Bill C-16 Controversy.” She had also shared the Voltairian epigram in an April 2017 tweet, although the context for that was somewhat less clear:

"To learn who rules over you, simply find out who you are not allowed to criticize." – Voltaire

A problem, however: not only is there no evidence of Voltaire having made that statement — there is ample evidence that it originates from an American neo-Nazi, who specifically penned the line to justify criticism of Jews.

Asked about inadvertently quoting a neo-Nazi, Kay — who is Jewish and a strong advocate for the State of Israel — says the error was “very ironic” but that she stands by her sentiment.

“With regard to the application of the quote to the Church of Gender Identity,” she tells CANADALAND in an email, “I do not regret it at all, and here is why. The quotation makes a great deal of sense. The fact that an anti-Semitic conspiracy theorist actually believed that the Jews ‘rule over you’ says a great deal about his twisted mind, but it does not reflect reality. I am neither a conspiracy theorist or a transphobic. My quarrel is not with trans gender people, who — I have said this repeatedly — simply want to live their lives in peace, but with the ideologues who are bent on imposing their belief system, founded in theory, but not in evidence, on everyone in the form of compelled speech and compelled expression of belief.”

“The words of the quotation in fact make very good sense,” she adds. “That the mind who thought it up was corrupted by hatred to the point that he was delusionary [sic] about who ‘you cannot criticize’ is not my fault.”

Three days after it was published, a CANADALAND reader contacted The Post Millennial to alert them of the error in Kay’s July 8 column, “Bill C-16, or The Transgender Identity Bill, is an act of ‘Velvet Totalitarianism.'” A webmaster for the Montreal-based site thanked the reader for “bringing this disturbing misattribution to my attention,” telling her they’d be “contacting the writer immediately.”

That, however, did not happen, and the column remained online and unaltered for two weeks, until CANADALAND got in touch with the site’s editors on Thursday.

“Our Chief Technology Officer did indeed receive the previous inquiry about Kay’s article,” managing editor Kevin Windwar writes in an email. “Unfortunately, he left to go on vacation on that same day, and must have forgotten to email me. I have just taken down Barbara Kay’s article, and we feel embarrassed to have missed this very specific detail. We will be contacting Barbara shortly to inform her as well.”

Kay says the error was first brought to her attention after she made it in her July 18 talk, but that she forgot to follow up to tell her Post Millennial editors. “Be skeptical if you want,” she writes, “but I would have been an idiot to remember and say nothing. I was not informed of this by the [Post Millennial]. If I had, it would have saved me from the embarrassment of using it again!!” She says she has written an apology to readers that she expects will be posted soon. (Update, July 27, 8:45 p.m. EDT: You can read it here.)

Explaining her process for authenticating quotes from famous people, Kay offers that “if I see it free-floating on the Internet, I endeavour to track it down, and that is not usually difficult. But if I see it referenced in an article by a writer I deem credible in a mainstream publication, and if the quote seems appropriate to the attributed speaker (and this one certainly struck me as Voltairean), then I assume it is ok.” She did not recall where she first saw it.

Kay was far from the first person to mistakenly credit the line to Voltaire. In late 2015, an Australian senator deleted all of his tweets after being called out for the same error. And Strom, who in 2008 was sentenced to 23 months in prison for possession of child pornography, has written that he finds the frequent misattribution to be “kind of flattering.”

Kay, a former Rebel contributor who continues to makes regular appearance both there and on the CBC, has recently come under fire for an escalation in her rhetoric concerning trans rights. Last week, Twitter forced her to delete a tweet in which she had claimed that “trans activists are *literally* body-snatching kids” after finding that it violated its rules against “hateful conduct.”

Not to be a narc, but Barbara Kay is a columnist with a national newspaper and is regularly invited on the public broadcaster's airwaves. Is accusing trans people of "body-snatching kids" consistent with @NationalPost and @CBCNews' editorial standards? pic.twitter.com/4tuVTomIOm

In her message to CANADALAND, she cites Twitter’s decision as evidence that “the Church of Gender Identity does rule over us.”

Asked if the CBC has any response to the requests for it to reconsider its relationship with Kay in light of her recent comments about trans people, spokesperson Chuck Thompson says, “As the public broadcaster, it’s our obligation to ensure a range of voices are heard on subjects that matter to Canadians; we do that every day across all of our platforms. We also, to your specific question, continuously examine the roles of our occasional contributors and the make up of our guest panels.”