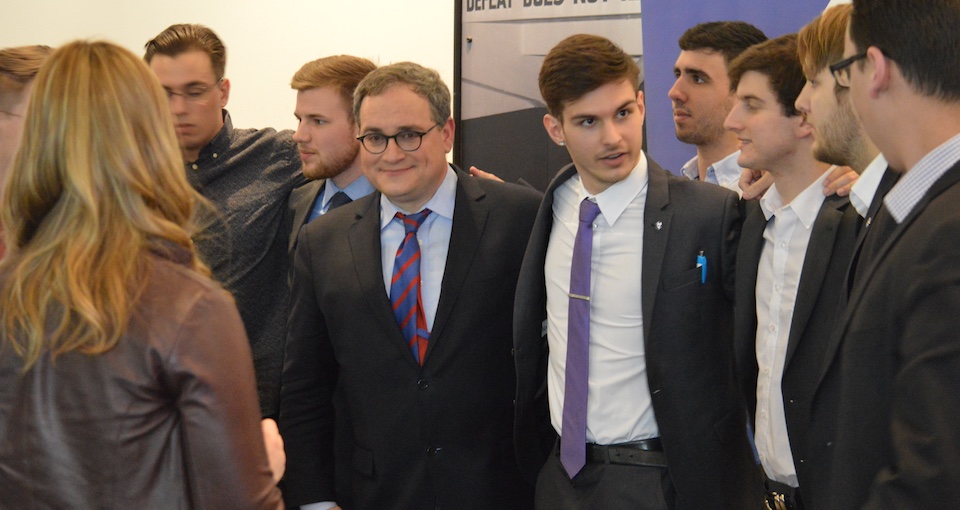 Ezra Levant Shows How To Lose Friends And Alienate People

When, on the eve of a campus talk by Ezra Levant, one of the groups sponsoring the event suddenly withdrew, it originally stated that there were a variety of causes, including “security threats.” But in an interview with CANADALAND, the president of Ryerson University’s Students Supporting Israel (SSI) reveals that the move was in large part due to its members’ discomfort with the speaker.

“Our group is democratic,” Rebecca Katzman says. “Many group members started to oppose bringing [Levant] in.”

SSI was planning to put on the talk — on “Campus Culture and Israel and the Middle East” — with the Ryerson Campus Conservatives, which ended up hosting the poorly attended March 22 event at the Mattamy Athletic Centre by itself. Attendees were matched in number by demonstrators standing outside holding signs with slogans like “Hate Speech ≠ Free Speech.” Halfway through, five protesters entered the room and disrupted the event for a couple of minutes. As they were escorted out, one enthusiastic Levant supporter repeatedly shouted “Cucks!”

Katzman cites several factors for the decision to withdraw, including logistical issues, threats, and members not wanting to associate with Levant. “There were a mix of threats from students. Some were about reporting us to the university and others were more violent in nature,” she says.

Katzman declined to offer more information about the threats in subsequent requests.

However, the group elaborated on the reasons in a series of posts on its Facebook page:

“Some of our executives felt threatened . . . many of our members didn’t feel comfortable with bringing him in. Additionally [a] majority of the threats and backlash came from Jewish students, many of whom support Israel, just not Mr. Levant . . . [it was] our fellow Jewish students who were not comfortable with the event. Not the people protesting. Not one of our members has expressed concern in us pulling out. In fact, many have expressed their thanks for pulling out of the event.”

Rebel Media founder Levant has come under fire for comments made last month by commentator Gavin McInnes during the outlet’s trip to Israel.

While there, McInnes recorded an anti-Semitic rant for Compound Media’s The Gavin McInnes Show, in which he claimed that Jews were responsible for the Holodomor (in which Stalin’s regime starved to death over seven million people in Soviet Ukraine), said he felt compelled to clarify neo-Nazi views for his Holocaust museum guide, and remarked that he was “becoming anti-Semitic.”

In another video, McInnes was shown drinking and talking with other Rebel hosts when he said that “Jews are ruining the world with their lies and their money and their hooked-nose, bagel-eating faces.”

During the Ryerson event, Levant only mentioned the McInnes affair once.

“We had this trip to Israel, and it was an enormous success . . . but there were a few self-hating Jews in Toronto . . . who suddenly thought they would condemn The Rebel because one of our edgy comedians said some dumb things.”

Levant, who has been on the losing end of multiple defamation lawsuits, also singled out Zach Ruiter, a Jewish reporter, at the event. Ruiter is the freelance Torontoist videographer who recorded a possible Nazi salute at The Rebel’s anti-M103 rally in February. Levant called Ruiter a “self-hating Jew” more than a dozen times while at Ryerson.

“That comment [‘self-hating Jew’] is extremely anti-Semitic, so it reaffirms why backing out of the event was the right decision,” says Katzman. “Many people from the Jewish community do not support Ezra Levant. It does not make anyone self-loathing. If I agreed with that statement, it would go against SSI’s core belief of free speech. People are allowed to protest when they do not agree, as people are allowed to sit and hear what he has to say if they do agree. The Jewish community should not be labelled.”

At other points in his talk at Ryerson, Levant called Ruiter “vestigially Jewish” and “a piece of shit.” He also referred to the editor of this piece, Jonathan Goldsbie, as a “self-loathing Jew” and said that CANADALAND publisher Jesse Brown “is about as Jewish as a ham sandwich.”

Top photo of Ezra Levant and members of the Ryerson Campus Conservatives by Evan Balgord.