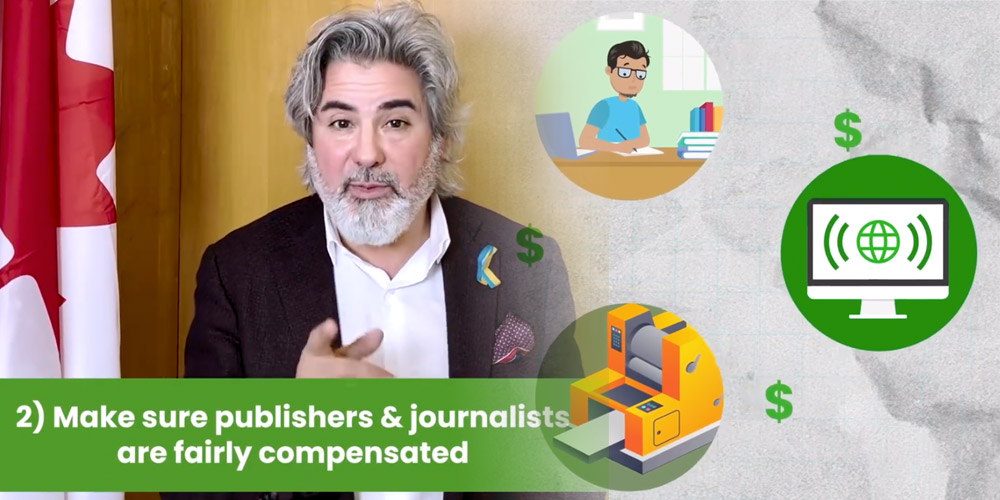 Explainer: Canada’s News Bailout, and what Facebook and Google have to do with it

Your guide to QCJOs, RJOs, and a bunch of other things with confusingly similar names
On the Monday show By Jonathan Goldsbie
Share

This week on CANADALAND, host Jesse Brown once again takes a look at the news bailout — this time from his perspective as a publisher.

Given everything we’ve seen of how it’s playing out in practice, Brown revisits his long-held reluctance to submit Canadaland for approval as a Qualified Canadian Journalism Organization. Is the new Online News Act the tipping point?

But what is a Qualified Canadian Journalism Organization, you ask? What is this Online News Act? Read on for a rundown of where things currently stand with what are, so far, the two biggest government interventions propping up Canada’s news media sector…

So what is the news bailout?

Well, that’s a good place to start. Setting aside a handful of smaller programs the government has established here and there in the last few years, the “bailout” usually refers to a trio of tax measures introduced in Canada’s 2019 budget:

Together, these three measures add up to $594 million over five years — which is the $600 million news bailout you’ve probably heard about.

Which publications are eligible?

When the government introduced this suite of programs, they wanted it to be closer to the system for film and TV tax credits (technocratic, almost automatic) than, say, the one for arts grants (evaluated by a jury that, at least theoretically, has an eye towards merit). But because figuring out eligibility engages some fairly thorny questions (e.g., what counts as “original news content”?), they came up with a framework that has elements of each.

Before a publisher can take advantage of any of these measures, they have to apply to the CRA for designation as a “Qualified Canadian Journalism Organization” (QCJO). (The form for that is here, if you’re curious.) Some of the criteria are fairly straightforward — like, is the organization Canadian? — but some require serious scrutiny and analysis.

Under the Income Tax Act, a QCJO has to be “engaged in the production of original news content” that is “primarily focused on matters of general interest and reports of current events, including coverage of democratic institutions and processes.” It can’t be centred on “sports, recreation, arts, lifestyle or entertainment,” nor can it be a trade or promotional publication, or produced on behalf of a government body. Lastly, it has to employ at least two journalists who, when it comes to producing content, deal with the organization at arm’s length (i.e., aren’t also the owners or their immediate family members).

The straightforward parts of the QCJO application are reviewed by the CRA. But the questions about content and the employment of journalists get passed off to a body called the “Independent Advisory Board on Eligibility for Journalism Tax Measures.” That’s a committee of government appointees with relevant expertise, who each get a few hundred bucks a day to pore over a sample of an applicant’s output to determine if the legal requirements are met. The board can have as few as three members and as many as seven; currently, there are four. The chair is Laval professor Colette Brin, who in an appearance on last week’s CANADALAND, shed some light on the board’s work.

I heard Unifor was on the board.

No, that was a different thing, the “Journalism and Written Media Independent Panel of Experts,” which met seven times over three weeks in the summer of 2019, to draft proposals for how the law should be interpreted — recommendations that the CRA adopted only in part.

That group’s work is long done, so unless you’re a regulatory historian or really into conspiracy theories, there’s probably no reason to think about them again.

Don’t tell me what I should or shouldn’t think about.

Okay! Sorry. It’s just, this program already has tons of details that can be wildly confusing, so why spend mental energy on something obsolete?

Fair enough. So whose applications have been approved and whose have been rejected?

Well, we know that in its first year of its operation, from March 2020 through March 2021, the board evaluated 157 applications for QCJO status. But we don’t actually know how many they approved, or which ones.

Are you telling me that who has QCJO status is a secret?

The short answer is yes. The CRA takes the view that even the name of an applicant counts as “taxpayer information” for the purpose of the Income Tax Act, the disclosure of which would be an offence. They won’t even say what proportion of applications have been approved or rejected.

The somewhat longer answer is that you can draw some inferences from the lists that are public: if a publication is an RJO or offers a qualifying digital news subscription, that mean’s they’re a QCJO. Plus, there’s nothing stopping a publication from voluntarily disclosing their status, and several have done so.

The Western Standard, for example, applied for QCJO status “for kicks.” And they received it, despite the board’s reservation that “less than 20%” of the 221 items the board looked at counted as “original news content.” The Rebel, on the other hand, got rejected, after the board deemed “less than 1 per cent” (13 of 276 items) to meet the definition [pdf]. Ezra Levant’s company has now applied for a judicial review of that decision [pdf].

What else does QCJO status get you?

At the moment, nothing. It’s just the gateway to potentially accessing those three tax measures.

Yes, and it’s about to get more complicated. Last week, the government introduced Bill C-18, the Online News Act, which, if passed, would effectively compel Google and Facebook to pay “eligible news businesses” for the privilege of making their news content available on their services.

To be deemed an eligible news business for the purpose of the Online News Act, a company would have to put in a request with the Canadian Radio-television and Telecommunications Commission (CRTC). If a company has QCJO status, that request would be rubber-stamped. If they don’t, then the CRTC would have to make a determination using criteria similar to those used for QCJO status.

Wait, so what are Google and Facebook supposed to be paying for, exactly?

It’s not especially clear. While each does run a kind of “featured news” section, this mostly seems to be about maintaining the status quo. Legacy publishers and broadcasters are more than a little annoyed that the advertising dollars that used to get sprinkled throughout the media now mostly wind up with two big American companies. And there’s a popular, if deeply perplexing, view that Google and Facebook have achieved this by “stealing” (i.e., hosting links to) legacy media’s news content.

Perhaps the more generous way to look at the Online News Act is that it pushes the big tech companies to redistribute slivers of their wealth to businesses that have been harmed by their success. Nevertheless, the government insists on selling this as a free-market solution.

In what way is this a free-market anything?

The government argues that they’re just bringing both sides to the table, because it’d be up to the tech companies and the news companies to hammer out deals between themselves.

Modelled on Australia’s news media bargaining code, the law provides for a bargaining process in which news businesses could negotiate these arrangements individually or as part of a group. (To put it nicely, it would allow for collective bargaining; to put it less nicely, it would allow for cartels.) If the businesses are unable to reach agreement on the monetary terms, they could avail themselves of an arbitration process administered by the CRTC.

Alternatively, the companies could avoid the bargaining process entirely by cutting their own side deals and then asking the CRTC for an exemption.

Would all of this be secret, too?

The details of the agreements likely would be, in most cases, but the names of the participating news businesses would not. The good news is that while the CRA tends toward hyper-secrecy, the CRTC has a habit of leaning in the other direction, publishing mountains of paperwork with often highly technical details. So if you’ve found that wrapping your head around all this has thus far been unforgivably undemanding, you’ll surely appreciate what the commission has in store.