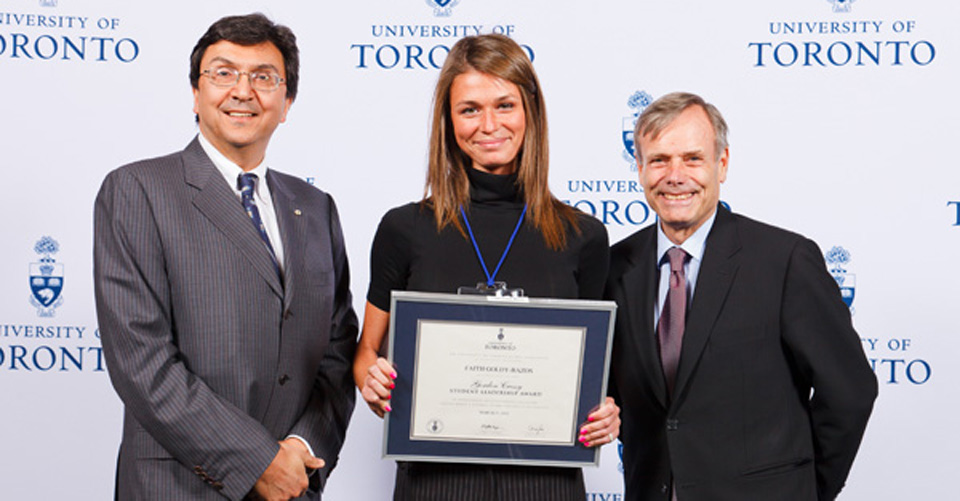 Letter to U of T Alumni Association describes the former Rebel personality as a "prominent writer and commentator in the white nationalist movement."
News Brief By Jonathan Goldsbie
Share

Update (March 26, 2:13 p.m. EDT): In a letter addressed to petition co-organizer Gavin Nowlan [pdf], the University of Toronto says it will not revoke Goldy’s award, because a student’s leadership contributions “are judged according to what they have contributed at the time of the award” and that it would therefore “be inappropriate to rescind the award granted to Ms. Goldy-Bazos in 2012.”

Ahead of Faith Goldy’s planned talk at Wilfrid Laurier University in Waterloo Tuesday evening, nearly 80 past recipients of a University of Toronto student award asked their alma mater to rescind the same honour it once presented to the alt-right personality.

In 2012, the U of T Alumni Association granted Faith Goldy-Bazos — as she was then known — a Gordon Cressy Student Leadership Award for her commitment to “the wider U of T community,” including her work with the Association of Political Science Students and on “social justice causes.”

But “since her time at the University of Toronto,” reads a letter to the Alumni Association signed by 76 past Cressy winners, “Ms. Goldy-Bazos has become a prominent writer and commentator in the white nationalist movement in North America. She has openly expressed support and advocated for the goals of the white nationalist movement, and has appeared as a supportive guest on white supremacist media.”

The full letter appears at bottom.

“Rewriting history to suit a particular narrative is a typical tactic of the Marxist Left — this is no different,” Goldy says in a message to CANADALAND. “Perhaps the signatories would consider commissioning a new petition to terminate the Gordon Cressy award altogether since its namesake is, after all, a white male.”

Shortly after her 2012 graduation from U of T’s Trinity College, Goldy became a commentator and correspondent for Sun News, where she remained until the broadcaster’s close in early 2015. By the end of that year, she joined Rebel Media, founded by former Sun colleague Ezra Levant.

Despite or because of her increasing interest in such concepts as “white genocide” and launching a new Crusade to expel Muslims from the Holy Land, Goldy rose to become one of the highest-profile voices at the far-right media company. In August 2017, she attracted considerable notoriety (and an implicit denunciation by the private girls’ school she’d attended) for her sympathetic coverage of the white supremacists in Charlottesville, and was fired from The Rebel for an appearance on a neo-Nazi podcast during which she mocked her Jewish boss Levant.

More recently, she has reappeared online, doubling down on a commitment to securing “a future for white children,” and on Tuesday night was scheduled to speak on “Ethnocide” as a guest of the Laurier Society for Open Inquiry, co-founded by TA Lindsay Shepherd. But the speech barely got under way before it was interrupted by a fire alarm, and the event was subsequently aborted.

“The Cressy award, now in its 24th year, has now over 3000 recipients,” Gordon Cressy tells CANADALAND in an email. “While deeply honoured by this award, I have never been part of the decision-making process on awardees, nor should I be. Clearly the UTAA will need to deal with this when the letter arrives.”

But Cressy, a former Toronto city councillor and U of T vice president of development, also praises the signatories for showing “they in many ways represent what the Cressy award is all about.”

(Cressy — whose son, Joe, is a current councillor — made headlines in 2015 for leading a coalition of prominent Torontonians who successfully pressured Mayor John Tory to address the racial-profiling practise known as police carding.)

He says he met Goldy just the once, at the awards ceremony, and that at the time she had earned it.

“Do I like what she has being doing recently? Absolutely not. For me there is a distinction between free speech and hate speech.

“As for revoking the award, though, this decision rests with the UTAA, and I will respect what they decide.”

The University of Toronto did not respond to CANADALAND’s requests for comment but told PressProgress that they would give the letter “thoughtful consideration.”

“What is an equally important story,” Cressy writes, “has to do with the enormous contribution many of the 3000
award winners are doing every day to make this world a better place.”

Updated at 8:25 p.m. EDT on March 22, 2018, to add comment from Goldy, U of T’s statement to PressProgress, and mention of how the planned Laurier talk turned out.

Dear Members of the University of Toronto Alumni Association:

We, the undersigned are past recipients of the Gordon Cressy Student Leadership Awards. Our awards recognize the highest ideals of the University of Toronto put into practice. Many of us have used the work we did during our time at the University of Toronto as a spring board to meaningful work in our communities. We are grateful to have been recognized by the Alumni Association, and are proud to be among such a distinguished group of people.

We write today to address the Cressy Award of Faith Goldy-Bazos (2012 recipient: Trinity College). Ms. Goldy-Bazos was awarded the Cressy for her work with the Association of Political Science Students as well as her work for social justice causes. Since her time at the University of Toronto, Ms. Goldy-Bazos has become a prominent writer and commentator in the white nationalist movement in North America. She has openly expressed support and advocated for the goals of the white nationalist movement, and has appeared as a supportive guest on white supremacist media. Though she may equivocate on whether she identifies as an outright white supremacist, it is a distinction without a difference, as her writing and media appearances lay clear where her views lie.

We thank you for taking the time to hear our request, and hope that you work quickly to respond in a meaningful way.