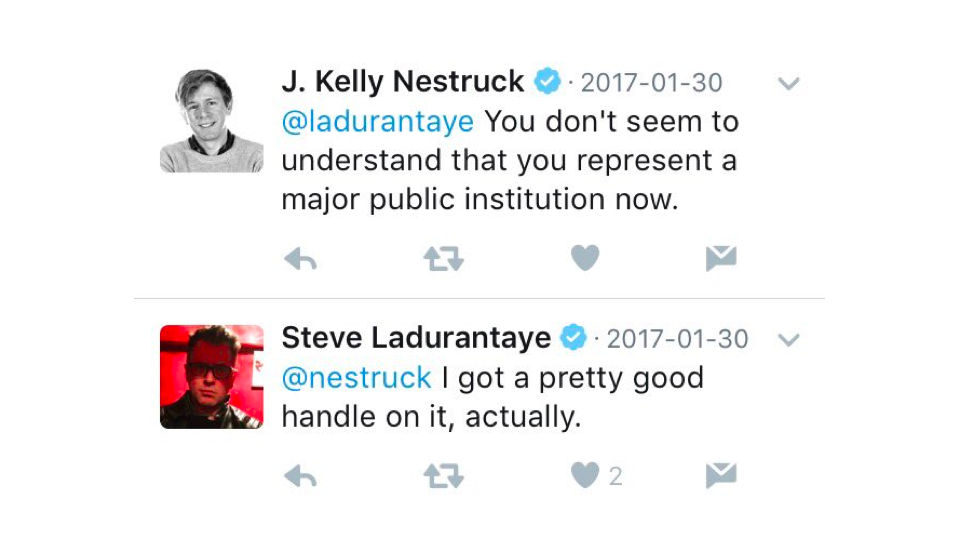 Steve Ladurantaye had apologized for his "dumb, glib tweet," but the CBC decided it had become too much of a distraction
News Brief By Jonathan Goldsbie
Share

In 2013, Steve Ladurantaye, then a media reporter for The Globe and Mail wrote a list of 26 Twitter rules for journalists. The first and last were the same: “You are one tweet away from being fired.”

On Wednesday, Ladurantaye, now at the CBC, was fired as a result of a tweet. Well, not fired exactly, so much as reassigned to a position of substantially less prestige and authority: moved from managing editor in charge of rebooting flagship news program The National to a role in the CBC’s “Content Experience area.”

“I have spent the last few days meeting with individuals and groups who have experienced personal hurt and community impact from an inappropriate, insensitive, and frankly unacceptable tweet late last week by one of our journalistic leaders,” wrote CBC News editor-in-chief Jennifer Maguire in a memo to staff.

Ladurantaye’s late-Thursday-night tweet — 19 characters in all — read: “I’ll throw in $100.” The pot into which he offered to toss this money was a collection for an “appropriation prize” to be awarded to a writer who best appropriates another culture — an unsubtle middle finger to Indigenous peoples and others hurt by the flippancy with which cultural appropriation is too often treated.

He later deleted his “dumb, glib tweet” and donated $100 to Canadian Journalists for Free Expression instead. He followed up by deleting that dumb, glib tweet as well. (CJFE initially offered to regift half the money to the person with the best tweet on the whiteness of journalism, but that tweet was also deleted.)

Ladurantaye — who between his Globe and CBC gigs was head of news and government for Twitter Canada — later tweeted a 13-part apology, which he helpfully collected into a Twitter Moment that has now also been deleted. But every time the CBC covered the “appropriation prize” controversy on all of their newscasts, they had to make a point of disclosing Ladurantaye’s direct involvement in it.

“As you know,” Maguire continued in her memo, “Steve Ladurantaye apologized for his action. He has made it his goal to better understand the appropriation issue from the perspective of Canada’s Indigenous people.”

“It’s also clear to Steve and me that the work of redeveloping The National needs the full attention and focus of us all, and I believe it is not possible given the current circumstances.”

She wrote that she plans to meet with Ladurantaye again in the fall “to re-assess his connection to The National going forward.” In the meantime, he’ll “work in our Content Experience area to help evolve our storytelling strategies.”

Ladurantaye did not immediately respond to CANADALAND’s request for a comment. But asked on Sunday night if he might be up for talking about what happened and what comes next, he replied: “I’m focusing on listening right now.”

“CBC, in consultation with all parties, including those affected, changed our mgmt structure.”

Top screencap from a January debate over Ladurantaye’s “normalizing” of The Rebel.