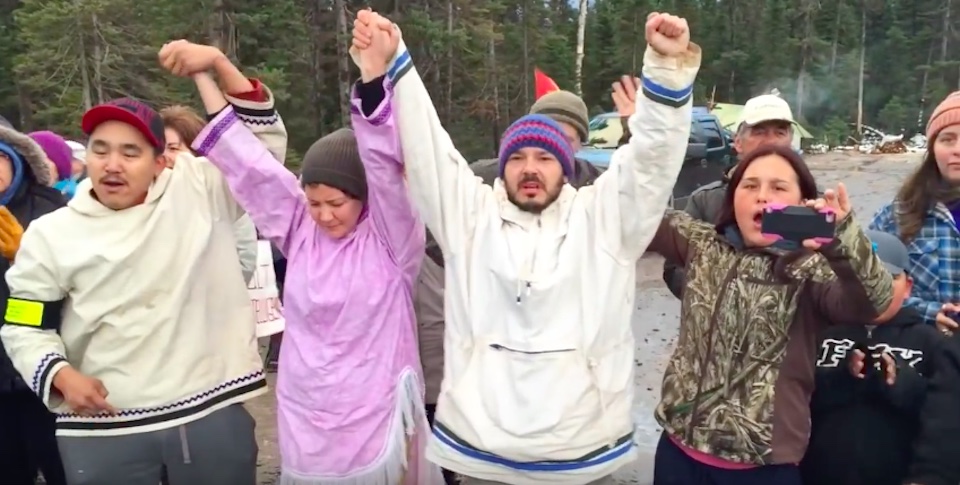 Judge: No Special Status For Journalist Charged For Covering Protest

In a ruling that could have implications for journalists covering protests across Canada, a Newfoundland and Labrador judge decided on Wednesday that an energy company applying for an order to remove named individuals from a protest site had no obligation to tell the court that one of the people they wanted to boot was a member of the media.

Justin Brake, editor and journalist for the province’s The Independent, faces criminal and contempt charges as a result of him violating a court order in the course of his reporting on last year’s occupation of the Muskrat Falls dam site. On March 15th, the Newfoundland and Labrador Supreme Court rejected the argument that Brake’s status as a journalist should have merited special consideration.

Brake’s lawyer, Geoff Budden, had argued that the court order against Brake should be vacated because when Nalcor applied for an injunction to keep demonstrators off their construction site, it didn’t inform the court that Brake, who was on their list, was a journalist.

But Justice George Murphy disagreed this week, stating that it wouldn’t have mattered if the court had known that Brake was there as a working journalist.

“Mr. Brake did not have any special status in this case because of the fact he is a journalist,” Murphy wrote in his decision (posted below in full). “There was no obligation on Nalcor to bring that fact to the attention of the court.”

In late October, Brake followed a group of Indigenous land and water defenders on to the Muskrat Falls construction site in order to report on their demonstration. This violated an injunction that Nalcor, the provincial energy corporation, had obtained from the courts in an attempt to deter the mostly Indigenous demonstrators.

A subsequent court order specifically named Brake, and for that was widely criticized by groups like Reporters Without Borders and Canadian Journalists for Free Expression, which pointed out that it amounted to the muzzling of a journalist.

“Every journalist in Canada should understand what the Truth and Reconciliation Commission Report says and what it’s about and what it compels us to do as journalists,” Brake tells CANADALAND. “This is more than just about me. We’re in a period of time in Canada’s history where Indigenous-led resistances, and other forms of resistance, are really the transformative spaces. If journalists are kicked out of or deterred from entering these spaces . . . [and] these things happen off-camera, that’s really bad for democracy.”

Brake and Budden had told the court that it is “plain and obvious that the fact of the Applicant [Brake] being engaged as a journalist is, indeed, material . . . the Applicant does note the special status of a free press as enshrined . . . [in] the Charter of Rights and Freedoms.”

In his ruling, Justice Murphy disputes that argument, finding that journalists have no special status. He cites a case resulting from the 1990 Oka Crisis, in which Federal Court Justice Marcel Joyal found that “freedom of the press . . . does not confer any special status on media people.”

Unlike Brake, however, the journalists in that situation didn’t face criminal charges resulting from the intervention of a Canadian court. When Justice Joyal was discussing “special status,” he was doing so in the context of whether journalists should be able to receive materials and aid separately from the Mohawk warriors they were covering.

In 1990, at the height of the crisis, at least two journalists were confined along with Indigenous demonstrators when they remained to continue reporting. The Canadian Armed Forces halted the flow of work supplies to the journalists, who argued for an injunction so that they could continue to receive supplies to keep doing their jobs.

Joyal declined to issue the injunction, stating that: “Should a journalist in quest of news put himself in a dangerous situation . . . it does not create a concomitant duty to people [the Armed Forces] to provide him with special treatment. If a journalist . . . feels it his professional duty to remain there, he cannot impose on any person an obligation to do all that would be necessary to keep him there.”

But even though their access to work materials was severed, their right to be present wasn’t questioned. In fact, Justice Joyal acknowledged that:

Admittedly, the role normally exercised by journalists is one which is fundamental to a free and democratic society. This is the role which the plaintiffs have voluntarily undertaken by maintaining their vigil in the compound and by continually filing their stories. In so doing, the plaintiffs are exercising their right to stay there.

Justin Brake will appear in Provincial Court in Happy Valley-Goose Bay on April 11th and will face a separate civil contempt charge in May.

Brake has launched a crowdfunding site to pay for some of his legal expenses, to which this reporter has made a donation.

Image at top from The Independent’s video of Muskrat Falls protesters defying the injunction.

CORRECTION (3/16/2017, 5:30 pm): This story originally indicated that Nalcor’s initial injunction to deter demonstrators was criticized for including Brake. In fact, it was a subsequent injunction that prompted ire for specifically naming Brake.