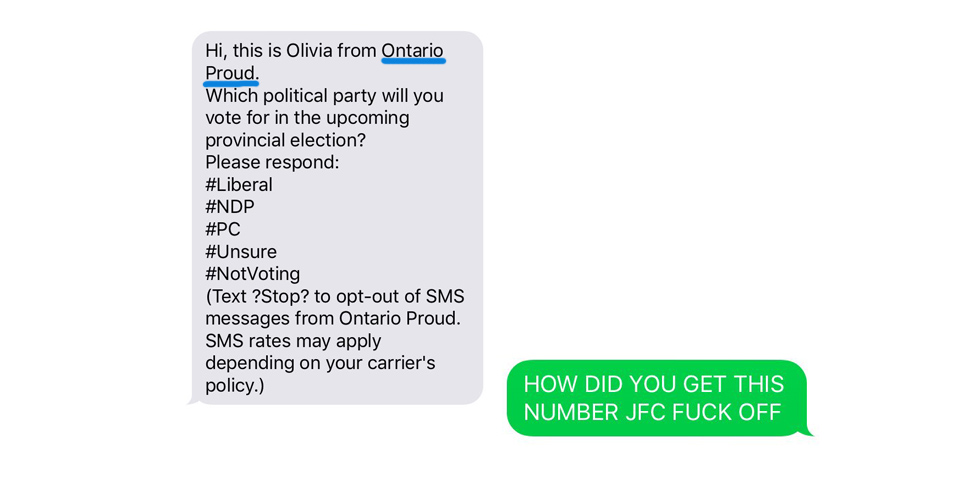 But the right-wing group won't say how many people it's contacted or how they got their numbers.
Article By Graeme Gordon
Share

Since Thursday, registered third-party advertiser and Facebook group Ontario Proud has been sending text messages to the phones of random Ontarians. The texts, sent by an undisclosed telemarketing company hired by the non-profit, greet people by saying it’s “Olivia from Ontario Proud,” then solicit them to text back which party they intend to vote for in this Thursday’s provincial election. There have also been calls from telemarketers and automated messages asking about voting intentions on behalf of the right-wing group.

But while it is not clear how Ontario Proud has obtained people’s phone numbers, its founder is forthright about the purpose of the messages: voter identification.

“So we can remind voters to vote strategically,” Jeff Ballingall says.

Ballingall — who has had ties to the provincial and federal Conservative parties — told CANADALAND last fall that his organization was “nonpartisan” and “promoting strategic voting” so that anyone but Premier Kathleen Wynne and the Liberal Party would win the 2018 election. Since polls started showing the Liberals out of contention and the Progressive Conservatives and NDP neck-and-neck, however, Ontario Proud has shifted its attack memes and videos toward targeting NDP leader Andrea Horwath and her party’s candidates, sharing them with its almost 370,000 Facebook followers.

Ballingall would not disclose the name of the call centre(s) involved in the current effort but said the contractor was responsible for using “Olivia” and that he wasn’t sure if she was a real person. (The messages were sent from multiple numbers, and when CANADALAND called several, they immediately went to an Ontario Proud voicemail.)

He also wouldn’t disclose the exact number of Ontarians they’ll be contacting through telemarketing companies but said it’s “significant” and will be in the tens of thousands, through the combination of live and automated calls, as well as the text messages.

@RogersHelps I began receiving spam SMS messages from a far right group, @ontarioisproud which I never signed up for on a private Rogers mobile line. Did you provide contact numbers to this organization? I would never provide my number to such a shady group. pic.twitter.com/URZBG26kte

Just got a text from Ontario Proud. Why does a hateful organization like that have my number and where did they get it?

Got a sweet robo text from some gross far right org called Ontario Proud or some crap asking who I'm voting for (it's no one since I'm not a citizen) so I told them I'm voting Communist Party.

“I feel angry,” says Toronto resident, event producer, and music booker Candace Shaw, about receiving the message from Ontario Proud. “I think they’re a right-wing propaganda group, and they seem to be campaigning to help the Tories win. I hate how disingenuous they are. And I hate that they somehow got my number.”

“I’m curious to know whether someone sold them my number or if they’re sending texts to everyone with certain Ontario area codes,” says freelance journalist Josh Dehaas. “In one sense, I guess it’s not that different from a pollster calling me. In another sense, it’s a bit creepy that an organization that presents itself as a Facebook community appears to also be doing political work. I want to know more about their motivations and what kind of information they have on me.”

One person called by Ontario Proud recorded and reported the automated call to nomorobo.com.

Other Ontarians complained to their telecom providers.

. @lauralynj All Phone Numbers in Canada are publicly available.
If you don’t want any further calls from Ontario Proud, we would be happy to put you on our internal do not call list.

Hi Lauralyn, you may want to ask @ontarioisproud how they got a hold of your mobile number. We never under any circumstance release your number to the public. ^MW

I'd be alarmed as well if I received a spam SMS knowing that I had not shared my number. We don't share our customer information outside of Rogers. You can report the spam SMS by forwarding the SMS to 7726 (SPAM). For more details check out https://t.co/mnRrwy4zDy. ^mh

“There are various individuals whom our vendor employs to reach Ontarians via telephone and SMS,” read a statement from Ontario Proud addressing the complaints.

“With respect to obtaining your number, all phone numbers in Canada are publicly available through the Canadian Numbering Plan. We are happy to put your number on our ‘do not contact’ list if you do not wish to receive any future messages. Please let us know.”

Furthermore, all calls currently being made comply with federal law. (2/2)

Automatic dialling is permitted in Canada.

A report in today’s Globe and Mail originally quoted a project manager with the Canadian Numbering Administrator (CNA), who had appeared to suggest that once the CNA assigns a phone number to an established telecom, that company can then turn around and sell access to the information to third parties: “If you’re a political party and you want to get phone numbers, you can start shopping around to whoever is going to provide that service for you.”

But a corrected version of the article published Tuesday afternoon clarifies that telecoms don’t resell lists of numbers and that the CNA publishes the first six digits (including area code) of every Canadian phone number on its website. Telemarketers can then use those digits to reach active phone numbers through (often automated) trial and error.

The Globe report also raised questions about whether Ontario Proud’s sending of unsolicited text messages was legal, citing Canada’s anti-spam legislation, which requires an organization to get consent from an individual to send “commercial electronic messages” to a Canadian’s electronic address. Ballingall told the paper that Ontario Proud hasn’t broken the law because their messages aren’t trying to sell Ontarians anything.

Ontario Proud is not the only third-party advertiser aggressively campaigning this election by targeting Ontarians’ phones. As CBC’s Mike Wise reported, environmental activist group Leadnow — which has been accused of indirectly receiving U.S. funding — says it has set up 67 phone banks and reached over 30,000 Ontarians, targeting Liberal and NDP voters to tell them to vote strategically in order to stop PC leader Doug Ford from becoming premier. The NDP has also sent text messages reaching out to its supporters who previously provided the party with their phone numbers.

Although Ontario’s Liberal government capped third-party advertising spending at $100,000 during the campaign period in legislation passed in late 2016, third-party advertisers like Ontario Proud don’t have to disclose the names of donors contributing over $100 until six months after the election. (Ballingall says his group has over 1,250 donors.) But there’s no limit to money spent on non-advertising-related activities like phone and text message polling, and donors for such activities don’t have to be disclosed.

Just had a phone call from Ontario Proud. Was hung up on when I told them I had already voted and who I voted for. Was curious to learn more about them so looked up website and FB page. Wish I had had the chance to hang up on them after taking a look. #isthiselectionoveryet

It's time for me to burn my phone and set fire to the nearest signal tower.#OntarioVotes

Ontario Proud just called to ask me how I’ll be voting. @OntarioGreens was not a choice. I guess they support the status quo. #ONelxn

Nice. Told OP I was voting Trillium, she hung up on me

CANADALAND reported at the beginning of May that Ontario Proud had been threatening some of its online critics with lawsuits, although it appeared the organization never followed through with the threats. The third-party advertiser appears to have since dropped the practice of threatening lawsuits via Twitter.

Header image adapted from Jen Agg’s screenshot of her exchange.