How Postmedia Has Pushed Islamophobic Attitudes Across Ontario

“Muslim family was targeted in fatal truck attack, police say,” read the headline on the front page of Tuesday’s Globe and Mail. “‘A premeditated act motivated by hate,'” said the National Post’s, while the Toronto Star went with “‘Unspeakable hatred.’”

And Toronto’s other major daily?

“Get ready to party on the patio!” 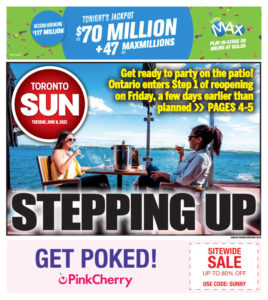 On Tuesday, the Toronto Sun saw fit to publish news of the allegedly hate-motivated mass murder of four members of a Muslim family in London, Ontario, on page 2. They syndicated a story from The London Free Press, also part of the Postmedia family. But while the Free Press declared that the family had been “TARGETED FOR THEIR FAITH,” the Sun’s take was uncharacteristically cautious: “TARGETED FOR THEIR FAITH?”

Today, the Sun ran a report from the London Free Press.

See if you can spot the difference in the headline: pic.twitter.com/Gm2vfbtbtu

Postmedia is Canada’s largest newspaper chain, with “120+ brands” in six provinces. Five of those are the Sun-branded tabloids it purchased from Quebecor in 2015. And as with any media chain, content gets shared across the network.

That often includes material from the Toronto Sun, recently described by former Toronto Star and current CNN reporter Daniel Dale as having “by far the worst roster of political columnists at any big-city paper in Canada or the U.S.”

Its output is now showered throughout the country, in pieces such as:

That same month, the Sun published this cartoon by Tim Dolighan: 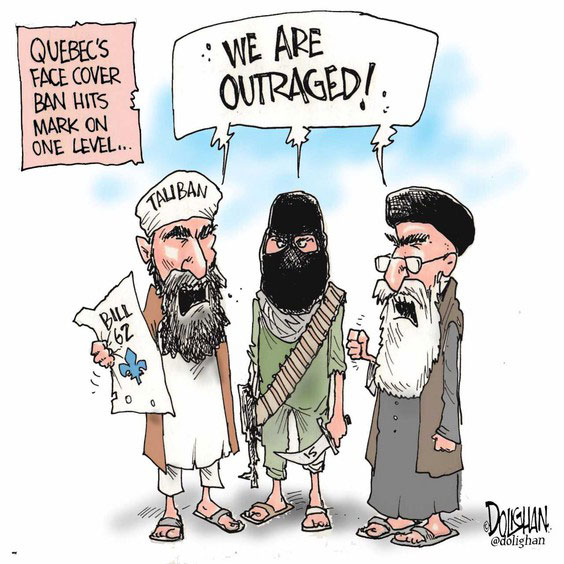 We know it also ran in The London Free Press, for example, because that paper subsequently printed a letter calling it “so hurtful to an entire community.”

The next year, the Free Press published a Sun column by Tarek Fatah that attempted to allay fears around the UN’s Global Compact for Migration, a non-binding agreement for countries that has 23 intended outcomes (including collecting better data on migration and ensuring that migrants have legal identification), by drawing a distinction between good immigrants and bad:

Critics are not averse [to] Filipinos or Venezuelans in our midst. Thousands of students from India enrich our universities while the boat people of Vietnam have long entwined into our fabric.

Canadians fear the arrival of Islamic radicals bringing anti-West values such as polygamy, burkas, sharia-based laws and gender segregation, but no one wishes to be labelled Islamophobic.

The fear of the Muslim radical is real.

The damage done by Islamic terrorists and Jew-hating clerics can still be undone, but not if radicals can prove to new recruits that Western society is intolerant.

There have also been unsigned editorials, such as this one, from less than two months after six men were slaughtered at a Quebec City mosque, that complained that a parliamentary motion to condemn racism had “needlessly singled out ‘Islamophobia’ for special treatment,” asking why it had to be “featured so prominently,” and suggesting it could be a backdoor effort to introduce blasphemy laws.

These pieces have played a part in shaping the public’s perceptions of both Arabs and Muslims in Canada, casting a quarter of the world’s population, in all its diversity, as a stereotypical “other” that is violent, misogynistic, and determined to colonize the West.

This isn’t to say that The London Free Press and other Postmedia papers don’t also cover violence that has targeted the Muslim community. They do. But in a world in which so many people consume niche areas of interest, often fed to them by an algorithm that privileges sensationalism over accuracy, it can be easy to overlook how such perspectives have been similarly curated for those who subscribe to, say, the Tillsonburg News. Writing that plays to the fears of white Canadians will find them, right alongside the straight reporting on Muslim communities in Canada that are now afraid to leave their houses and go for a walk.

Danielle Paradis and Jonathan Goldsbie are editors at Canadaland. Goldsbie and the Sun‘s Anthony Furey co-authored a weekly column on Toronto municipal politics for Postmedia’s National Post in 2010.