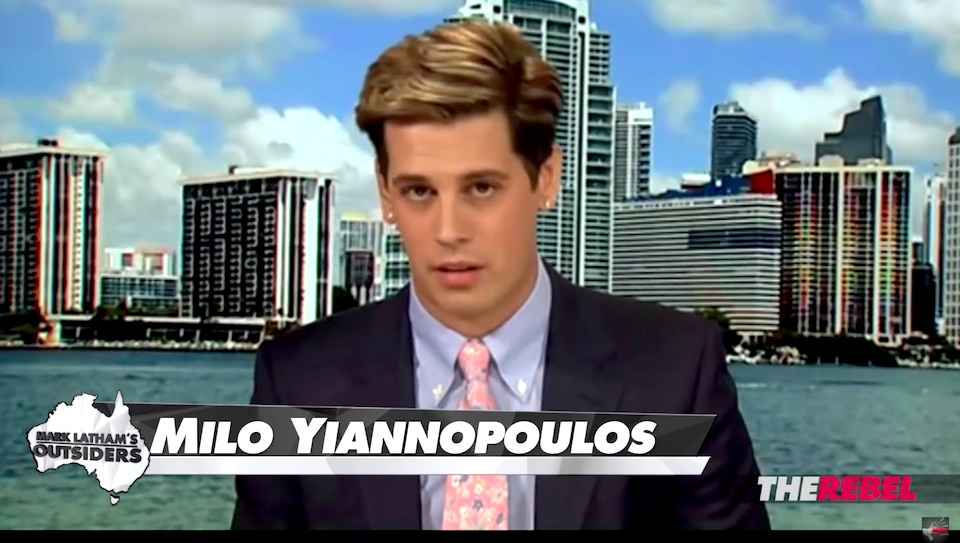 Less than a week after BuzzFeed revealed ties between Milo Yiannopoulos and prominent white nationalists and neo-Nazis, Rebel Media was still happy to host the "really intelligent and insightful person."
Article By Graeme Gordon
Share

Just over a week after relaunching Rebel Media with a handful of news shows meant to put its white-supremacist-sympathizing personalities in the past, the company welcomed Milo Yiannopoulos as a guest on its Australian series, Mark Latham’s Outsiders.

The October 11 interview with Yiannopoulos came on the immediate heels of an explosive BuzzFeed exposé that revealed, through leaked emails, that Yiannopoulos had collaborated with white-nationalist figures in creating a de facto alt-right manifesto for Breitbart last year. The report included a video, recorded by white nationalist Devin Saucier, of Yiannopoulos singing “America the Beautiful” at a karaoke bar while Richard Spencer and others gave Nazi salutes.

Latham’s Rebel interview with Yiannopoulos was a cordial 20-minute conversation in which topics ranged from Yiannopoulos’s Twitter ban, his “painting a positive vision of the West,” the upcoming Australian leg of his Troll Academy Tour, and how he was “a fellow traveller” to the alt-right — in agreement on “immigration, Islam, and political correctness — [but] the race stuff I hate.”

Despite Yiannopoulos’s reportedly odious past collaborating with and hiring racists and anti-Semites coming to light six days prior, Latham’s fawning interview with Yiannopoulos didn’t address any of it. The Aussie Rebel personality failed to ask the infamous internet troll any questions about the revelations in the BuzzFeed article, which also revealed that his email passwords had been allusions to Hitler and Nazi Germany.

“Wasn’t that amazing stuff? Milo Yiannopoulos is a really intelligent and insightful person,” Latham said after the interview. “Why wouldn’t the mainstream media want to understand those views, learn from them, and report them fairly?”

(Yiannopoulos has dismissed the BuzzFeed video and article, claiming that he didn’t see the crowd giving Nazi salutes because of his “severe myopia” and that he couldn’t possibly be racist or bigoted because he had just married a Black man a week before the article was dropped.)

The Rebel interview also raises questions as to why a company that recently attempted to distance itself from the alt-right — and fired one of its biggest personalities for going on a neo-Nazi podcast — was now interviewing and promoting Yiannopoulos. In his post-Charlottesville memo disavowing the alt-right, Rebel head Ezra Levant had claimed that the movement had only recently become dominated by Spencer and other white nationalists; previously, he wrote, leading figures had “included the outrageous but loveable Milo Yiannopoulos, who just happened to be a half-Jewish gay man who preferred black men.” (Yiannopoulos’s maternal grandmother was Jewish, which makes him Jewish, per Jewish law, and he identifies as such when convenient. He is, however, a practicing Catholic.)

But the BuzzFeed report cast doubt on the degree of separation between Yiannopoulos and those of Spencer’s ilk. Neither Latham nor Levant responded to CANADALAND’s requests for comment.

In the emails obtained by BuzzFeed, Yiannopoulos corresponded with and sought input from notorious alt-right figures like Saucier, Vox Day, and The Daily Stormer’s Andrew “Weev” Auernheimer. In one email exchange with Saucier, the editor of the white nationalist American Renaissance magazine, Yiannopoulos explained how he was “easing everyone in gently” into discussing different levels of intelligence between races. The BuzzFeed story also reported that Yiannopoulos hired an underling despite “his propensity for racism and anti-Semitism on social media” and revealed that much of Yiannopoulos’s writing had been ghostwritten by a Breitbart colleague. As a result of these revelations, BuzzFeed reported, Breitbart executive chairman Steve Bannon told an acquaintance that Yiannopoulos is “dead to me.”

Three days before interviewing Yiannopoulos, Latham and The Rebel released a promotional video entreating viewers to sign a counter-petition in response to a petition (currently at over 1,100 signatories) demanding that the Australian prime minister and immigration minister bar Yiannopoulos from entering the country because of his intention to “incite hateful speech.”

“What do we know about Milo: he’s young, he’s fabulous, he’s gay, he’s Jewish, he loves Black men. We love him — we believe him on that front,” said Latham in the video. “So naturally, [lefties are] trying to ban him from coming into Australia, the great Milo Yiannopoulos… What do they have to worry about? He’s absolutely fabulous… Milo, you’re welcome Down Under. We’re going to support you 200 per cent.”

Unlike the original petition, hosted on Change.org, The Rebel counter-petition was hosted at DontBanMilo.com, a domain registered by Rebel founder Levant. Levant and his ultra-conservative news site have routinely registered domains to fundraise and create petitions, gathering databases of personal emails through popular political campaign software NationBuilder.

Part of the “200 per cent” support from Latham included creating a meme to promote his Australian tour dates. According to Yiannopoulos, Latham Photoshopped his face on to a popular Australian hot-chocolate product also called “Milo,” prompting Nestlé to consider legal recourse.

More from the Memes Department: pic.twitter.com/5psNlSUaT1

Latham is a former Australian politician, having separately sat in Australian parliament and as mayor of the Sydney suburb of Liverpool. He was also the official leader of the opposition when he led the Australian Labor Party for a little over a year in the early 2000s. Shortly before joining The Rebel, Latham was fired as a political commentator by Sky News Australia (where he also hosted a show called Outsiders) for deriding colleagues and a teenager on his series at the end of March. Before that, he had parted ways with the Australian Financial Review after attacking several journalists on Twitter in 2015.

Last week, he was sued for defamation as a result of comments made on an August episode of his Rebel show. As has become customary, The Rebel is now crowd-funding for his legal fees.

Yiannopoulos has had a close relationship with The Rebel over the past couple of years, appearing semi-regularly on shows hosted by Levant and former personality Gavin McInnes. Levant also created a petition to reinstate Yiannopoulos’s verification on his former Twitter account after it got removed by the platform. And last year, The Rebel advertised Yiannopoulos as a celebrity speaker on its inaugural Rebel Cruise, before he disappeared from the lineup.

In February, Yiannopoulos fell from grace among the conservative establishment — losing his Conservative Political Action Conference (CPAC) speaking invitation, Simon & Schuster book deal, and job at Breitbart — because old interview footage showing him appearing to defend pedophilia emerged after a Canadian teenager did some online digging. (Yiannopoulos would go on to apologize, claiming he misspoke and that his comments only referred to his own experience having relationships with men in his early teenage years.)

Yiannopoulos also made headlines in July 2016, when he was permanently banned from Twitter after writing a column and tweets that incited his troll army to attack actress Leslie Jones online; the harassment included comparing her to dead gorilla Harambe.

Correction (10/25/17, 12:50 p.m. EDT): The last sentence of this piece has been amended to clarify that Yiannopoulos himself did not write a column comparing Jones to Harambe.