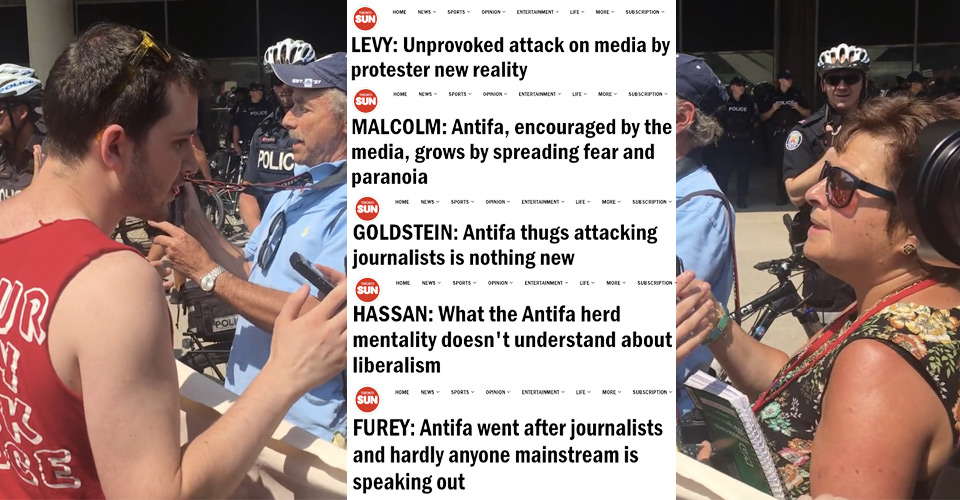 Right-Wing Commentators With A Persecution Complex Is Nothing New

A man aggressively grabbed a Sun journalist’s hat, the Sun demanded it be a dominant story in that week’s news cycle, and the mainstream media obliged.
Opinion By Graeme Gordon
Share

You’ve probably heard by now that a Toronto Sun photojournalist was assaulted on August 11 by a demonstrator at Nathan Phillips Square during an anti-hate demonstration. The alleged perpetrator was thankfully caught and charged the following weekend by the police. It was an apparently unprovoked, cowardly attack by a muscular 28-year-old man on a smaller 63-year-old man, veteran Sun photographer Stan Behal. Everyone should be glad the alleged assailant has been charged; aggressively putting one’s hands on another without permission is never acceptable in a civil society, and those who commit such acts should be punished.

That being said, the bellyaching from Sun commentators claiming this attack was initially ignored by mainstream media because Behal was a Sun journalist and because the culprit may have been an “Antifa” demonstrator was just plain ludicrous.

They cawed on Twitter and in their columns that the mainstream press didn’t want to make left-wing activists look bad.

Thanks for your level-headed analysis Robyn. Stan did not deserve it at all, despite what the alt-left might think. I was verbally attacked and stalked too for just doing my job, but I suppose it's okay when it concerns me because I'm outspoken and on the right…True? https://t.co/Hj83fwvs9b

Memo to my colleagues in the MSM: A thug assaulting a Toronto Sun photo- journalist is way worse than government staffers applauding a government announcement. So how about we get as incensed about the former as we have been about the latter? https://t.co/VWo97sFJ7K

This is an all out assault on my good pal ⁦@StanBehalPhoto⁩ and we need your help identifying who did it. The guy hits with hard right slaps followed by a left punch. Sucker shots on a photog who with camera is vulnerable. Thx ⁦@SueAnnLevy⁩ for telling us. pic.twitter.com/8pi6eTEuXT

It's been 48 hours …still waiting for some of my colleagues in the media to agree this was wrong. @JohnToryWatch @JoeWarmington @sunlorrie https://t.co/EQ4HBXBglu

Pretty sad statement about what has become a them vs. us mentality among Toronto's MSM snobs. Don't forget it's also okay because it happened to me too. I don't know if it's professional envy or just discomfort that we're not part of the "pack." https://t.co/NhELq9gIY0

Yet, around the same time last year, two Global News reporters were assaulted by Antifa protestors in Quebec City, one being shoved down stairs and the other’s camera being destroyed. Other than Global News’ own coverage, there were hardly any other reports of the incident. In June of 2017, Kevin Metcalf, then the promotions and communications coordinator for Canadian Journalists for Free Expression, was verbally threatened and physically assaulted by right-wing demonstrators in Toronto. The attack was caught on tape, but again, there was not a lot of coverage. Back in 2014, journalist Joey Coleman, an occasional guest on CANADALAND, was grabbed and shoved by Hamilton city councillor Lloyd Ferguson. Much of the security footage showing the assault was destroyed, a sham investigation was conducted, and the story never got any national media attention.

Sadly, the persecution complex of right-wing media personalities is nothing new.

Speaking to a former employee of the defunct Sun News channel before writing this column, he recalled a very minor physical altercation during the 2014 Burnaby Mountain protests between one of the network’s reporters and a protestor that was inflated into a major story reported for days by Ezra Levant and other Sun News Network hosts. More recently, Rebel “Commander” Levant has had young female Rebel personalities attend left-wing demonstrations, ostensibly to cover them, but also to provoke left-wing protestors into getting angry — then reporting gleefully when they’ve successfully incensed their targets. When Rebel Media correspondent Sheila Gunn Reid was assaulted in Edmonton, having her camera punched out of her hand by a left-wing activist — a despicable act, to be sure — the far-right outlet milked it for all it was worth, putting out a bounty to find the man, creating a website named after the assailant, and raising funds to sue him in court. The mainstream media covered the assault extensively.

Yet, as Sun columnists were bemoaning the mainstream media not caring for their safety, they must’ve forgotten or were oblivious to Sun columnist Joe Warmington attending a Rebel Media live event as a guest speaker back in June, where he stood by while a BuzzFeed journalist was called nasty names by Levant, Gunn Reid, and others, whipping up a hostile crowd of Rebel supporters. Journalist and author Scaachi Koul was compared to vaginal itching by one Rebel personality and was trashed by Levant in a rant to his congregation; he called Koul a “bigot” and “fake news,” working for “a dumpster fire.” Sheila Gunn Reid led Rebel attendees to chant “lock her up,” and Rebel’s David Menzies called Koul a “degenerate,” “mentally unstable,” and “thuggish.” This encouraged the attendees to clap, cheer, and hurl their own insults at Koul. (CANADALAND, coincidentally, just pointed out how Sun columnists, who distanced themselves after Rebel’s meltdown last summer, are back being buddy-buddy with Levant’s far-right outlet, which, needless to repeat, is extremely hostile towards many journalists.)

Stan's been in contact with the police so we'll see what happens from here on it. Good news is while the assault was unprovoked and shocking he wasn't hurt so I'm a bit calmer now. https://t.co/mzgpDISXNh

Then there’s the fact editor Lorrie Goldstein said Behal was fine a couple days after the assault, but the paper later reported he was afflicted with a concussion and on leave from work. I won’t cast doubt on Behal’s story (he is, by all accounts, a well-respected and well-liked professional). I won’t ask questions of Behal, such as when he consulted his doctor and who his doctor is, like Goldstein asked of the Danforth shooter’s family, after his colleague Anthony Furey suggested the family’s press statement, which explained their son had a long history of mental illness, was crafted by a “spin doctor.” Concussion symptoms can be noticed days later, and I sincerely hope Behal gets better soon.

(The Sun also thought it was a good idea to print the address and apartment number of the family of the Danforth shooter, a pretty clear example of journalists endangering others.)

(A) The family released the statement, through a third party, not the police, making it a public document, not a police document.
(B) I didn't ask for medical records. I asked for dates they consulted with doctors and the names of the doctors. https://t.co/mH1JYJlte5

Meanwhile, Canadian neo-Nazis are calling for the killing of liberal journalists, and another far-right group recently stormed Vice’s Montreal newsroom to intimidate journalists who put themselves in danger by unmasking the increasing radicalization of the Canadian alt-right. That’s not to say there isn’t a legitimate threat from elsewhere on the political spectrum, e.g. Black Bloc in Montreal, but Sun columnists acted as if they’re uniquely persecuted.

“On August 11th, the Worldwide Coalition Against Islam, a hate group that calls Muslims sewage and scum, and have called for their execution, wanted to hold a rally in Toronto and failed in the face of the planned counter-demonstration and far-right infighting,” says Evan Balgord, the executive director of the Canadian Anti-Hate Network (and former CANADALAND contributor), which helped get the word out and endorsed one of the organizing efforts. “It’s disappointing that most of our news industry followed the Toronto Sun and focused so much attention on the Behal incident at the expense of the most important story from that weekend — that WCAI was stopped.”

Sun columnist Sue-Ann Levy smeared the entirety of the group of demonstrators at the anti-hate rally as hate-filled in her column recounting the event, failing to mention that other attendees immediately told the man to stop when he assaulted Behal.

The reality is one jackass acted alone in aggressively grabbing a Sun journalist’s hat, the Sun demanded it be a dominant story in that week’s news cycle, and the mainstream media obliged. Howling journalists get the ink devoted to them, I guess, but no one should be fooled into thinking they’re hard done by.

Graeme Gordon is a freelance journalist regularly contributing to CANADALAND and Loonie Politics.