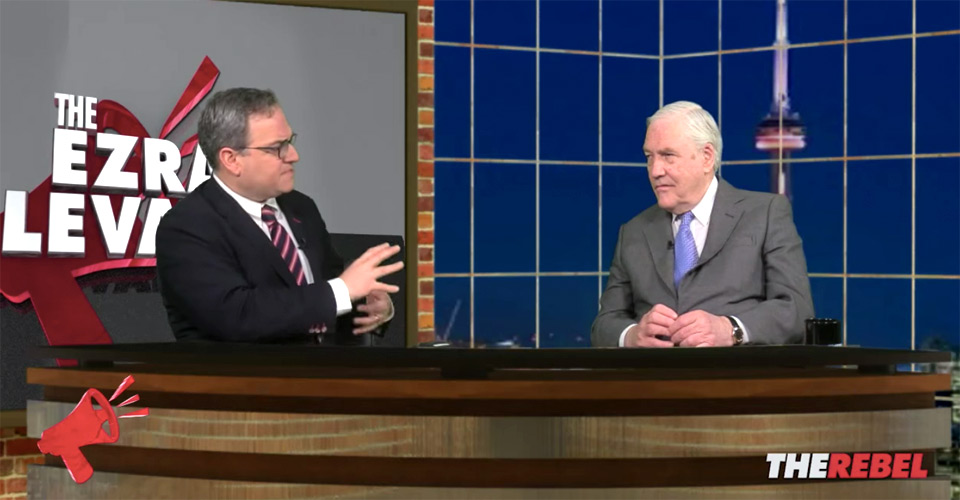 Charlottesville was a turning point for The Rebel.

Faith Goldy’s sympathetic coverage of the white-supremacist rally in Virginia and casual discussion of the “JQ” (Jewish Question) sparked a crisis for the Canadian far-right site that saw contributors leave, its cruise cancelled, politicians distance themselves, former employees turn into whistleblowers, and star correspondent Goldy fired for going on a neo-Nazi podcast on which she laughed about her Jewish boss’ fondness for bacon but only when he can get it for free. All within five days.

Among those who departed as contributors in the week following the August 12, 2017, “Unite the Right” rally was National Post columnist Barbara Kay, who told CANADALAND at the time that while she still believed in the site’s promise, it had crossed a line with regard to “tone.”

“At a certain point,” she said, “the cost/benefit of dealing with the blowback created by The Rebel’s culture of impulsive aggression had to be reckoned with, and I reckoned the cost as too high for the benefit. Which, by the way, was significant for me; the few videos I made for The Rebel reached more people than I could ever have reached in print.”

Host Gavin McInnes coincidentally left around the same time, having gotten a better offer elsewhere (despite his own anti-Semitism controversies), and the simultaneous loss of both him and Goldy was immediately reflected in The Rebel’s viewership on YouTube, its primary platform.

While the subscriber base has continued to increase, it’s never returned to its pre-Charlottesville rate of growth:

And finding it challenging to attract new, high-profile personalities who could bring with them their existing fan bases, video views also tumbled sharply:

After Goldy and McInnes left, the only correspondent who could reliably draw high numbers was Tommy Robinson, the anti-Muslim activist and former leader of the white-nationalist English Defence League, who remains one of the biggest names in the British far right. And he left The Rebel in February, shortly after it emerged in Woolwich Crown Court that a man who carried out a terrorist attack on a London mosque, killing one worshipper and injuring a dozen more, was an apparent fan of Robinson’s Rebel content. (More recently, The Rebel helped spearhead a successful campaign to appeal Robinson’s jail sentence for contempt of court, which had partly stemmed from his early work for the site; he remains on bail pending a new trial.)

A former colleague of his recently told the Sunday Times that The Rebel was paying Robinson the equivalent of about $160,000 CAD a year, subsidized by barcode-scanner magnate Robert Shillman. At least some of that money now goes to Katie Hopkins, a former contestant on the UK version of The Apprentice, who later became an anti-immigrant pundit but found it increasingly hard to keep gigs in British media due to things like calling for a “final solution” after the Manchester bombing.

Like Goldy before her, Hopkins uses her Rebel platform to talk about “the genocide of whites.” And when she came to Toronto this past spring, she remarked in a video that it was challenging to find someone who “looks like they actually come from Canada. ‘Cause everybody here looks like they come from Africa.”

I went out and about in Toronto to find someone who actually comes from Canada. I struggled. @TheRebelTV pic.twitter.com/S0YaTAGCZq

But as the events of Charlottesville have gradually receded into the past, many of the mainstream media personalities who — publicly or quietly — put distance between themselves and The Rebel have begun to return to its platform. Those include Kay and the Sun‘s Candice Malcolm, who no longer contribute their own video op-eds but have become regular guests on The Ezra Levant Show.

What follows is a non-exhaustive list of mainstream media personalities who have re-established ties with The Rebel following absences. Most make appearances on Levant’s flagship show, on which they often lend him credibility by nodding along — sometimes politely, sometimes in apparent agreement — with his extensive theories on just about everything.

This is the state of things one year on from The Rebel’s Very Bad Week: 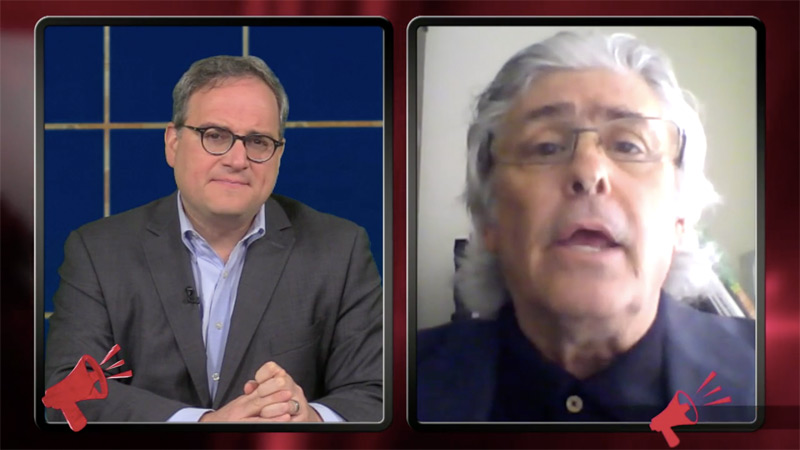 Rebel appearances since Charlottesville: May 28 and July 13, 2018 (as guest on The Ezra Levant Show)

Sample quote: “Andrea Horwath and the NDP say they would make Ontario a sanctuary province, when the City of Toronto is already inundated by illegal immigrants who are coming across — irresponsibly, as you’ve reported so much on on The Rebel — into Quebec, and Justin Trudeau is saying, ‘Well, we’ll just send them to Toronto.’ And she’s saying, ‘Fine, we’ll take ‘em!’” (May 28) 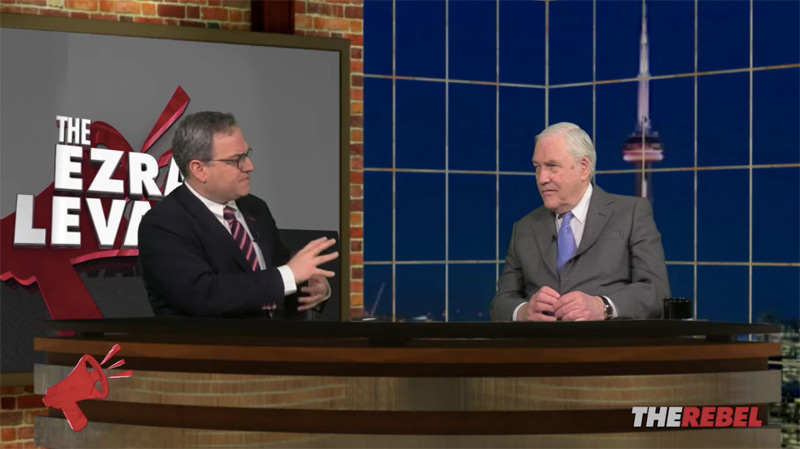 Last Rebel appearance before Charlottesville: December 29, 2016 (On the Hunt with Faith Goldy)

Rebel appearances since Charlottesville: May 21 (The Ezra Levant Show) and July 12 (Take That with Kurt Schlichter), 2018

Sample quote: “And the other side of it is, [Donald Trump] does have superhuman stamina. He almost never sleeps; he works all the time. Even people who don’t like him at all admit that he is astonishingly persevering and strong physically.” — Black, after speaking approvingly of Trump’s effectiveness at seeding doubt concerning Hillary’s Clinton’s physical fitness (May 21) 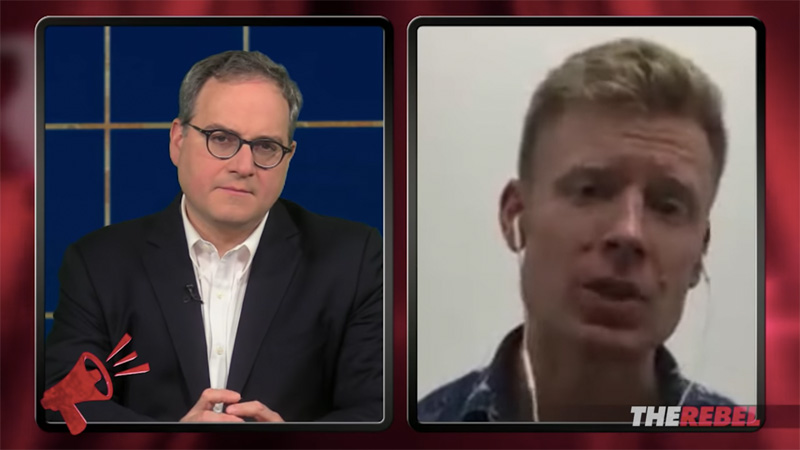 Sample quote: “I think the Donald Trump challenge, and the nice thing that we saw [with him], was he was able to go around the media narrative that were only interested in representing him not fairly but in a negative light. Does Doug Ford have that ability?” (March 12) 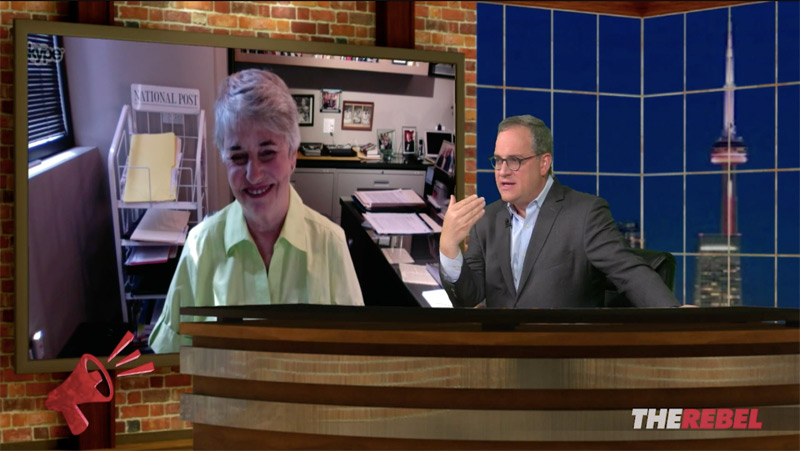 Sample quote: “You know, Adam [Goldenberg] doesn’t seem to understand the difference between a sexual preference and a gender. Adam does not have to be on hormones for the rest of his life…. Adam is fertile. And he doesn’t have to worry about his — if he wants to have children, he can have children. So, you know, the trans situation is so different. They have more in common with anorexics than they do with gay and lesbian women.” — Kay, about a gay fellow CBC panellist who compared the language she used to discuss trans people to the way that gay people used to be described (July 16) 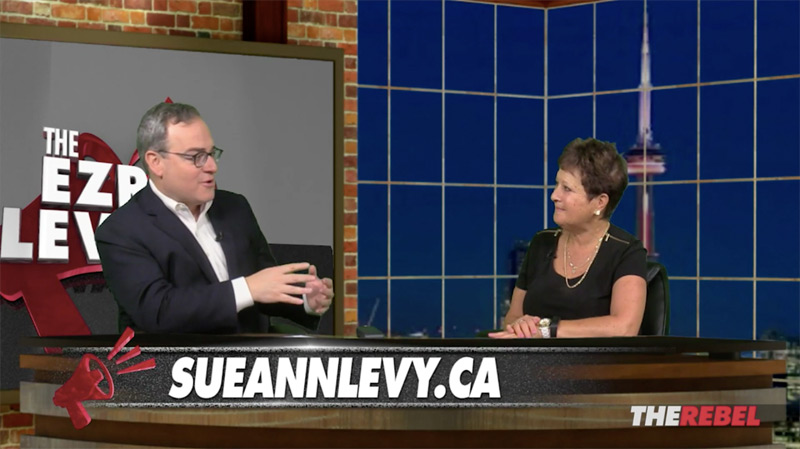 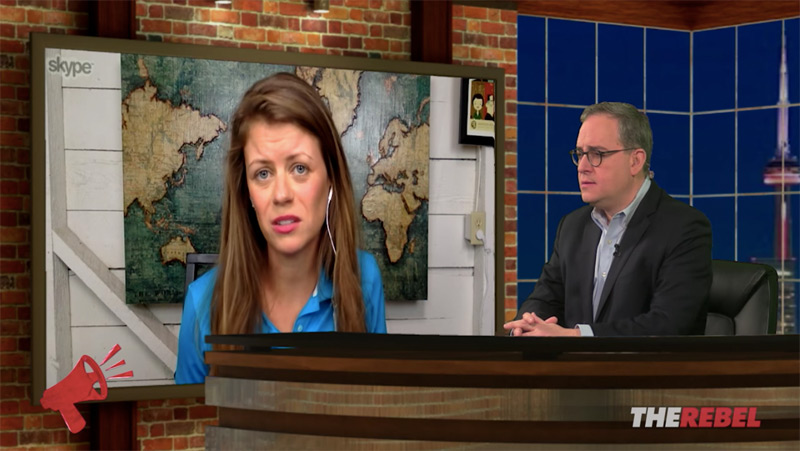 Sample quote: “The last [federal] budget included all kinds of mumbo-jumbo about ‘racialized’ Canadians and different funds for different types of ethnic groups, divided on race lines. It’s despicable. It shouldn’t happen in Canada. You know, most people want to move past those conversations and think of Canadians as one united family. And then there’s this group of leftist, Marxists, who are pushing this very divisive type of identity politics, and you can see it in all of the policies they make. Right down to people who criticize their open-border, irresponsible immigration policies get branded as ‘racists,’ as if the two things are even connected. So I think that this is definitely a culture war that’s brewing in Canada.” (April 17) 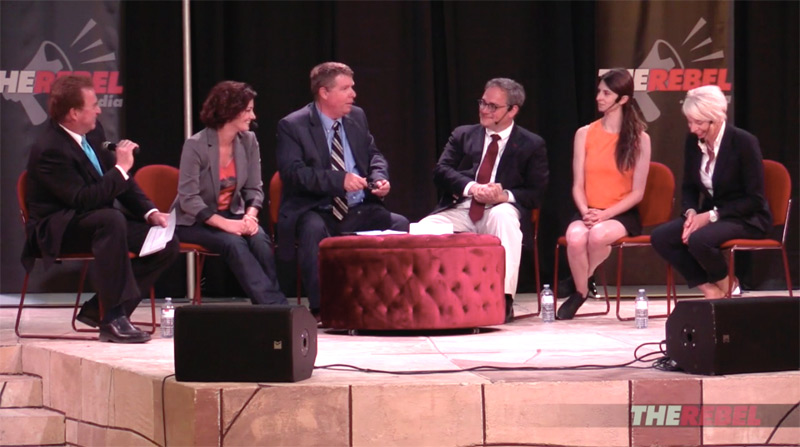 Sample quote: (to Levant) “You have a lot of us in the mainstream media, you have more respect than you realize. And also… It’s important to say, because I’m sure there’s times when you feel so alone. And you know, this fighting for Tommy Robinson that you’re doing, as well, is really admirable, because, you know, we need the UK to feel the pressure from across the ocean, and I think they’re feeling it.” — Warmington, speaking about Levant’s advocacy for then-jailed far-right leader Robinson, at The Rebel Live’s Free Speech Panel, on which Warmington sat with Katie Hopkins, Lindsay Shepherd, Sheila Gunn Reid, and Levant 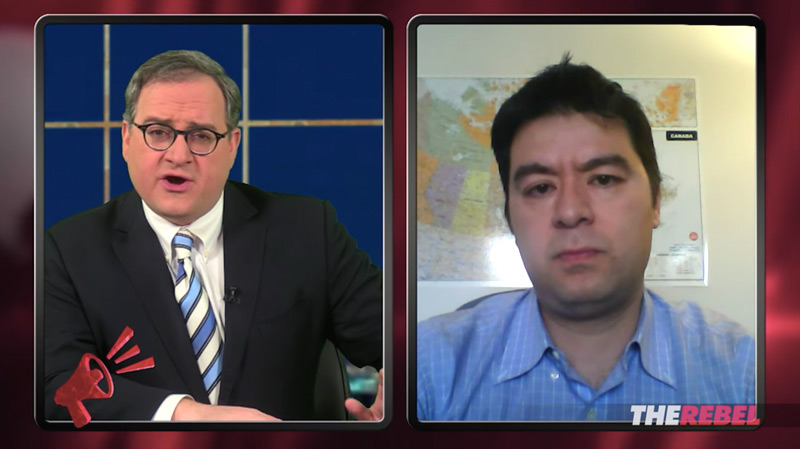 Sample quote: “There’s dozens and dozens of pages talking about the gender-balanced, gender-area-based analysis they’re doing, but very little about simple things like the deficit and debt….It was almost as if they didn’t want to write a budget, they wanted to talk about sociology and gender studies, and that’s really what made up most of the document.” — Wudrick, on the Liberals’ 2018 federal budget (February 28)