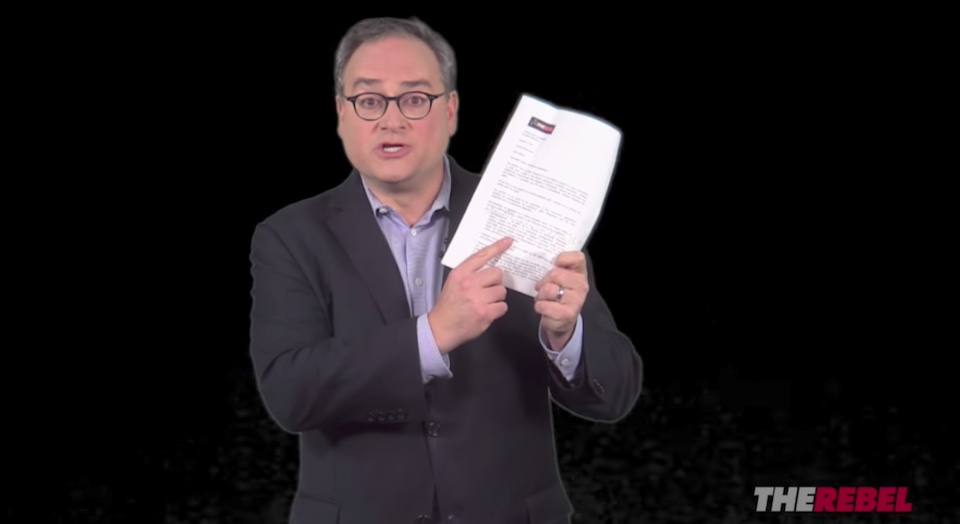 On Friday, the company abruptly whisked away two other Rebel employees living at the same address
Article By Graeme Gordon & Jonathan Goldsbie
Share

The former Rebel contributors who published a video containing explosive allegations concerning the company’s business practises — and who Rebel founder Ezra Levant subsequently accused of “blackmail” in his own video — are alleging that Levant “doxxed” them by displaying their home address to Rebel viewers.

Caolan Robertson and partner/producer George Llewelyn-John live together in a house in Bedfordshire that formerly served as a home base for The Rebel’s UK operations. They recently entered a 12-month lease for the property, with the intention of continuing their Rebel work not far from Tommy Robinson, the site’s biggest British name. There were two other Rebel employees living in the house, but on Friday they were suddenly whisked away.

“Rebel doxxed me and released my full address, today (one day after) he told the two Rebel employees who were living with me to move out immediately, a moving van came today, and they are now gone, for their safety?” Robertson told CANADALAND in a message Friday. “Antifa has already ‘liked’ a screenshot [of the address].”

On Thursday afternoon, CANADALAND asked Levant in an email whether the release of the address was intentional or accidental but did not receive a reply. When we followed up late Friday, Levant explained that he had missed our earlier message (“I’ve had quite a few emails this week”) and was “unaware of their address being in the video. I’m happy to ask our team to blur that.”

As of the time of this posting, it remains in the video.

(In May, Levant posted a tweet that contained a screenshot of an email revealing the phone number of a National Observer writer.)

With regard to the others in the house being abruptly relocated, he said, “We had current staff living with disgruntled former staff who are disparaging us — you can imagine how uncomfortable that was for everyone, so they moved out.”

The house was the subject of an online argument between Levant and his ex-employees earlier Friday, when Robertson released another video, this one to Twitter.

It contained more surreptitiously recorded audio from an early-August meeting between Levant, Llewelyn-John, and Robinson, in which they discussed the terms on which Robertson and Llewelyn-John would finalize the severing of their ties with The Rebel.

The audio in the two-minute video has been edited, but CANADALAND possesses a copy of the full 51-minute recording (which is unverified but appears to be a complete and genuine record of the meeting).

Most of the two-minute video consists of Llewelyn-John denying Levant’s claim that he and Robertson had been trying to extort money from The Rebel in an earlier severance negotiation with Levant’s liaison and friend Kory Teneycke. In the clips, Llewelyn-John maintains that the meeting with Teneycke involved only discussing compensation for severance and for covering the remaining rent on the lease for the house, which he says Levant encouraged them to get.

“The main thing is the money I was asking for was for the difference in rent — not to stop me from ‘exposing’ the Rebel,” Llewelyn-John says to CANADALAND in a message.

Shortly after the video appeared, Levant asked on Twitter, “Then why did you want £8,000 more? Why are you not releasing your whole spy tape unaltered? I guess you’ll answer in court.”

Then why did you want £8,000 more? Why are you not releasing your whole spy tape unaltered? I guess you'll answer in court. https://t.co/1JMjKQjxwO

“Robertson and [Llewelyn-John] made a series of increasing extortion requests in a series of meetings in the UK,” Levant expands in an email. “I reluctantly agreed to them. But when even the final written agreement was amended with hand-written additions; and then even when that was signed, they started phoning our administrator demanding more money still (and to be paid in advance); it finally dawned on me that they would never stop asking for more, so I flew to London.”

However, an email previously shared with CANADALAND by Llewelyn-John appears to suggest that the meeting was not the purpose of Levant’s trip but rather added as a sort of afterthought.

“I’m coming to the UK tomorrow for the day to see Tommy,” read the August 4th message from Levant to Llewelyn-John, which appears genuine. “I think it’s worth the three of us meeting for 20 minutes, to see if there might be a chance to resolve things amicably before Monday’s deadline. I don’t think Caolan should come to the meeting — I don’t think that would assist in the conversation.”

Levant has not responded to CANADALAND’s request to clarify the apparent discrepancy.

In the audio of the meeting, as in his later video, Levant repeatedly describes the situation as involving a “shakedown” and “extortion”:

“Ascot” appears to refer to a late June incident at the Ascot Racecourse in Berkshire, at which Tommy Robinson was videotaped repeatedly punching a man, in what he later claimed was self-defence. Because of a three-month suspended prison sentence he had received the previous month — stemming from his attempt to record a confrontational Rebel video in and around a courthouse — any offence of which he is convicted through November 2018 would automatically result in him serving at least those three months in jail. Levant has alleged that Robertson and Llewelyn-John threatened to release incriminating footage relating to the event if their demands were not met, and that he travelled to the UK to get them to sign a non-disclosure agreement specific to Robinson. The pair has vigorously denied ever making such a threat and has asserted that they remain good friends with Robinson.

I have no 'evidence' of Tommy doing anything wrong, stop throwing him in the mud you loon @ezralevant

In the recording, Levant repeatedly holds up former star correspondents Lauren Southern and Jack Posobiec as examples of employees he recently fired who chose to be publicly “positive” about their respective splits.

While Levant has remained adamant that Teneycke told him it was a “shakedown,” Llewelyn-John believes he was simply unhappy with the deal.

“Either Kory or Ezra is lying outright about threats. I suppose it could be Kory to save his ass over making an agreement Ezra didn’t want to pay,” he says.

Teneycke declined to comment, other than to say that Levant was a “former client.” Levant did not respond when asked by CANADALAND if he would be able to provide any evidence of the pair having threatened him in some way.

I will release many documents, on a video, in defamation court, and as evidence of extortion to the police. https://t.co/ma1UkwsJdP

Correction (August 19, 2017, 11:20 a.m.): For the first few minutes after this post went up, it quoted Levant as having said, “Jesus Christ, that’s called severance.” Upon relistening to the audio, however, he appears to have actually said “that’s not severance” — which, frankly, makes more sense in the context.